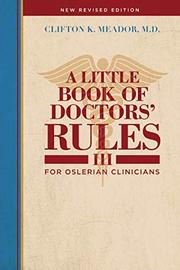 An updated guidebook to the finer nuances of patient care.

Physician Meador (Fascinomas, 2013, etc.) offers a new, modernized edition of his book of medical maxims, which was first published in 1992. Its core intent is to remind “medical students, residents and physicians in primary care” that their focus should be on “treating a person, not a disease.” The recommendations in it are derived from the teachings of early 1900s Canadian physician and educator William Osler, which focus on the benefits of personally and attentively interacting with patients. Since the first edition of this book, Meador says, an emphasis on patient volume, unnecessary screening tests, and increasingly complex division of health care has had the effect of further “separating the physician from the patient,” and he frames this new edition as a sort of refresher course. He delivers sage wisdom through small, declarative dictums, which are potent enough to stand on their own without exposition or explanation. For instance, the book begins with the basic tenets of doctor-patient eye contact, human touch, and compassionate, uninterrupted attention (“When you are listening to a patient, do not do anything else. Just listen”). Other chapters incorporate tips on mental health assessments, drug prescribing, and caring for “difficult” patients. A comprehensive closing section (“General rules for being a physician and a professional”) encompasses a cornucopia of clinical guidance that will be of particular benefit to medical students. Throughout, the author’s advice underscores the importance of prioritizing human interaction above corporate bottom lines. A few of the notes here make oddly broad assumptions (“After midnight all [dementia] cases get clinically strange”), but they’re all well-intentioned and practical. 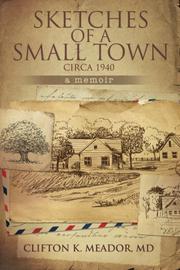 A memoir of growing up in a small Southern town during the Great Depression and World War II by doctor and author Meador (Fascinomas, 2013).
After attending the funeral of John Sherling, one of his two best boyhood friends, Meador realized that the story of his youth in Greenville, Alabama, might be interesting to his descendants, and to general readers. Growing up, he says, he was unaware that some of the people he knew—cross-dressing Juan Carlos, intellectually challenged “Frog,” mother-daughter prostitute team Louise and Pearl, fearless prankster Leon, and his two best friends, Sherling and Charles Chambliss—would be unique characters anywhere, let alone in tiny Greenville, where people were categorized by religion, gas brand preference and men’s-club membership. Some aspects of Greenville life, however, were not at all unique for a Southern town, including the acceptance of racial segregation and the contrast between city and country life. Meador tells the unvarnished truth about his adolescence; he doesn’t try to inflict 21st century sensibilities on his youth, nor does he attempt to prove that his beliefs were significantly different from those of other Alabamians of the time. His younger self’s burgeoning teenage libido also receives extensive attention. At times, however, the book’s remembrances seem emotionally detached, whether due to the passage of years or a deliberate choice. For example, the book mentions the loss of the author’s mother to colon cancer merely as background to other stories, and as the reason he and his father began taking meals at Mrs. Riley’s boardinghouse, when her death was likely a huge, watershed moment in the family’s life. To his credit, however, Meador resists giving in to the nostalgic conceit that life was better when he was young.
A solid, if not emotionally insightful, memoir for fans of stories of the American South, the Great Depression and the homefront of World War II. 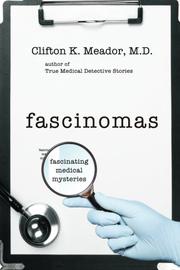 Combining “fascinate” with the suffix “-oma” (which often designates a tumor), Meador coins a term for the medical conundrum of doctors being left stumped until a new piece of evidence comes to light. Yet the author insists that, when trying to understand an illness, getting to know a patient is just as important as grasping symptoms. Even a very careful doctor can overlook warning signs or fail to ask the right questions. The first of Meador’s patient sketches, all based on real cases shared by his colleagues, concerns a girl whose temporary paralysis was caused by a hidden tick bite—a diagnosis reminiscent of medical TV dramas like House or Scrubs. Other peculiar findings, related to Meador by his Vanderbilt colleagues or other doctors, involve typhus from rats, an allergy to yellow dye and carbon monoxide poisoning. Some patients cling to self-diagnoses despite their doctors’ opinions to the contrary; this is especially true of conditions with a psychological component, such as hypoglycemia and fibromyalgia. Simply having a name for an illness can function like a crutch that patients are reluctant to relinquish. At times, this self-definition can go further: In cases of Munchausen syndrome, patients keep themselves sick, perhaps by injecting wound sites with their own feces to induce infection. Asking simple questions and establishing rapport with even such self-deluded patients can give physicians an entrée into discussing underlying mental issues. Meador ends with what is perhaps the collection’s most bizarre story: A college senior developed lichen planus rash after drinking copious amounts of cinnamon schnapps, which contains gold flakes—his blood level of gold was 86 micrograms, compared to a normal level of less than 1 microgram. A few anecdotes would benefit from more detail, and the overall effect could be less provincial if Meador included tales from further afield. Many of his “characters” sound, perhaps unfairly, like ignorant country folks due to their transcribed Tennessee dialect and folksy names.

A quick, enjoyable book of health-related who- and whatdunits. 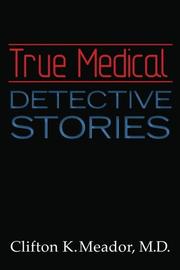 An intriguing account of 19 medical mysteries and the true-life medical detectives who solved them.

Over his 50-plus years of practicing medicine, Meador (Puzzling Symptoms, 2010, etc.) has seen many unusual illnesses that defied traditional diagnosis. In his latest book, he recounts the most fascinating—and downright bizarre—of these cases, in which patients experienced troubling medical symptoms with no apparent cause. The cases involve both Meador’s and others doctors’ patients. All, however, are solved using the same method: medical deduction rooted in careful listening. The book begins with a dedication to the late Berton Roueché, who popularized the medical-detective genre as a staff writer for the New Yorker. The first chapter, “Dr. Jim’s Breasts,” revisits an interesting case involving a 76-year-old man who suffers from the ailment of the title. Without giving away the ending, through much inquiry, the cause of the man’s breast enlargement is discovered—and it is a curious cause indeed. This and other cases illuminate a consistent theme, which is that patients, with a doctor’s guidance, are often their own best medical detectives. In the chapter “Two Cases of Pneumonia: Two Different Causes,” two unexplained incidents of chronic pneumonia are solved by an infectious disease specialist who teases out patient histories with careful listening and questioning and by “involving a family member in the search for clues.” Other chapters, such as “A Paradoxical Suicide Attempt” and “A Near Death from Hexing,” provide striking examples of the mind’s ability to create profound physiological responses and the need for physicians to take this into account. The author’s suspenseful, Sherlock Holmes-esque retelling of each case will keep the pages turning. But this is more than just a collection of entertaining anecdotes. In an age of technology-driven, impersonal medical care, Meador provides a powerful reminder of the need for meaningful dialogue between doctors and patients.

In a world of high-tech medical care, Meador makes a compelling argument for the simplest of diagnostic tools—listening to a patient.