Along with enjoying a tranquil life in rural Northern Nevada, Clint Adams is now marketing his first historical novel—and second for adults—EVANGELINE The Seer of Wall St. After having spent over a decade prior as a teen-fiction author, Clint leaves young adult publishing with a smile on his face...and lots of good memories. His first novel for adults, a thriller: The Seventh Ritual, a race for survival. Since the publication of his first book, Just Say Mikey in 2002, Clint Adams has conducted dozens of his Stories About Facing Fear workshops in an effort to help teens everywhere maintain that "I can do anything" attitude. In conjunction with these events, Clint actively marketed his three multicultural teen novels Fear Ain't All That and its sequels Don't Be Afraid of Heaven and My Watch Doesn't Tell Time. He has also authored numerous academic publications while at The Washington Post’s Kaplan Inc. and McGraw-Hill publishing, and has been a member of the Authors Guild for over twenty years. Clint earned his Bachelor of Arts degree in drama from the University of California, Berkeley, studied creative writing at San Francisco State University and received his master's degree in marketing from San Francisco's Golden Gate University. 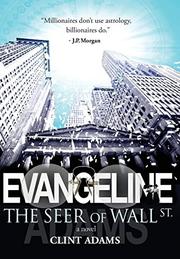 A fanciful, fictional memoir of the real-life Evangeline Smith Adams, the most famous astrologer of the early 20th century.

Anyone who can predict the future should be able to write her own obituary. Adams, the astrologer, known as the “seer of Wall Street” for advising clients like J.P. Morgan, reportedly predicted her Nov. 10, 1932, demise earlier the same year. Adams, the author (The Seventh Ritual, 2009, etc.), pushes that prediction backward three decades to establish the primary tension driving his story—professional ambition versus the ticking clock. (The author has no familial relationship to the astrologer or her ancestors, U.S. presidents John and John Quincy.) The fiction closely follows fact and includes reprints of newspaper stories. In 1899, the 31-year-old Evangeline, unconventional and career-minded, cancels a wedding engagement; moves from Boston to New York to launch her astrology business; predicts the Windsor Hotel fire; gains notoriety; and sets up shop at Carnegie Hall. She later beats fortunetelling arrests in court; maintains a long-running relationship with an actress, playwright, and suffragist; and marries her young business manager, who propels her career via radio, books, and speeches to the pinnacle of fame and fortune. Mirroring Evangeline’s affinity for gaudy antiques, Adams has a penchant for piling up modifiers: “Hands rested aimlessly upon the 19th-century mahogany teapoy table, faces stared into the Italian Gilt Wood Grapevine mirror blankly, and mindless chatter took place around the Baroque ‘Putto Face’ cast iron wall fountain.” Whether such constructions enhance the story’s verisimilitude or detract from it depends on personal taste; they occur often but neither make nor break the story. Style aside, the story itself is intriguing, the pace is lively, and the pages turn quickly. The author infuses his characters with consistent personality traits, believable motives, and outlooks that are changed by events over decades. Most importantly, he gives Evangeline a fitting central quest: reconciling her confidence in the infallibility of the stars with her own life choices.

After this fine historical novel, it’s easy to predict new fans for Adams.

EVANGELINE The Seer of Wall St.

Translating songs into German (inside my head) while going for walks.

Don't Be Afraid of Heaven

How in the world did fear ever become so popular, especially when it never should have existed in the first place? Why were we put here to do what we want, if we end up being too afraid to do it? In DON'T BE AFRAID OF HEAVEN, 13-year old Miguel Estes feels that being "scared to death," and having "the life scared out of me," are no longer just tired, old expressions.they've become part of a world-wide epidemic. Now rid of the fears that once paralyzed him, Miguel decides to help others eliminate theirs; he founds F.A.A.T. (Fear Ain't All That), an after-school group with his eccentric but wise Aunt Shirley. In its first meeting Miguel befriends Samantha, a girl diagnosed as having an exotic variety of phobias, fears, and anxieties. With a fierce determination, Miguel helps Samantha rid her life of one debilitating fear after another. Together, Miguel and Samantha learn much about life, fear, and death. Revelations from Aunt Shirley, and recurrent dreams of his brother Jorge (who already lives in heaven), also remind Miguel that "heaven is a far better place than here. It's nothing to be afraid of; it's the perfect place to be.everything about it is perfect." After undergoing a radical transformation, a stronger-than-ever-before Samantha, grows to be ill. As her condition worsens, Aunt Shirley informs Miguel that the greatest lesson he can possibly share with his dear friend is to help her be unafraid of going to heaven. Of course he's uncertain about accepting this task. But, paradoxically, it ends up being Samantha who teaches Miguel. Prior to leaving, Samantha feels only joy, excitement, and relief about her upcoming journey; Miguel, due to Samantha's experience, becomes unafraid of his own mortality. Samantha, now completely fearless, moves on; although left behind, Miguel celebrates Samantha's life as well as her death.
Published: June 30, 2005
ISBN: 978-0976837510

Fear Ain't All That

How in the world did fear ever become so popular, especially when it never should have existed in the first place? Why were we put here to do what we want, if we end up being too afraid to do it? For some who read FEAR AIN'T ALL THAT, learning to exist without fear is an option. For twelve-year old Miguel Estes, it's a necessity. Miguel happens to live with a fatal form of the skin-blistering disease E.B., yet believing he'll have a future is what sustains him. "The longer you keep your To Do list, the longer you'll have to hang around to get everything done," says Miguel's Aunt Shirley. Through his insightful aunt, through his dreams about his brother Jorge in heaven, and through the challenging lessons he's chosen to learn, Miguel is able to eliminate nearly every fear within him-all that's left is his mighty power of belief. In the end, Miguel is the ultimate victor; he realizes he's living life the way it was meant to be lived...without fear.
Published: June 30, 2005
ISBN: 978-0976837503

Just Say Mikey -- ?an incredible journey from the insidious grips of fear?to the elation of ultimate freedom. ***** In today's world, a climate dominated by technological advancements, it may be time to play spiritual "catch up." Upgrades provide infinite options, but now more than ever people are finding one, single enhancement to be the most important they will ever implement, the elimination of fear from their lives. Miguel, the central character in this mainstream novel for adults and young adults is unique, yet he shares a trait common to many children; a lifetime measured by days instead of years. Miguel happens to live with the skin-blistering disease Epidermolysis Bullosa, but he spends little time thinking about it. For Miguel, living with fear is far more deadly than this potentially fatal disease that encompasses his life. Miguel happens to command an extraordinary ability to view life as few others do, with razor-sharp insights and an unwavering spiritual conviction that all things are possible to those who believe. The action in this novel revolves around Miguel's many changes and transformations as he comes to realize that he was put on earth for a purpose, to teach others about the enormous power of belief and faith (in themselves)?just as ( Miguel believes) God intended. Just Say Mikey is told solely through Miguel's point of view, yet it is not a children's (juvenile or middle-grade) book. Opposing perspectives dominate the three main characters in this book. The protagonist, of course, is Miguel, a boy who is open to change, open to any new ways of keeping himself alive. Throughout the course of this story Miguel learns and applies these new ways taught to him by his Aunt Shirley (Kirkland), a woman who may be thought of as eccentric, revolutionary, and wise all at once. The antagonist is fear itself, personified in this story by Miguel's mother, Shirley's sister, Sharon Kirkland-Estes, a woman who loves her son dearly, but happens to be paralyzing him with her imposing fears and (dis)beliefs. The geographical setting is comprised of three radically different environments within the San Francisco Bay Area, all in present-day. First is the luxurious, opulent, thirtieth-floor Nob Hill (San Francisco) apartment in which Miguel and his mother live. Second is Aunt Shirley's serenely beautiful and sanctuary-like house in the Berkeley hills. Third is the hygienic and medicinal world of the Lucille Salter Packard Children's Hospital at Stanford University (Palo Alto/Menlo Park). Many other Bay Area locales are significantly featured: Big Sur, Bodega Bay, Golden Gate Park, Marin County, and more.
Published: April 1, 2002
ISBN: 978-1591130970

"What if time runs out?" is the question that makes 14-year old Miguel Estes sweat every night. Miguel's certain of three things though: he's here to learn lessons, he lives with a fatal form of the skin-blistering disease E.B., and the clock never stops ticking. In his quest to learn everything from the challenging life he's been given, Miguel discovers who's responsible for time being over. My Watch Doesn't Tell Time is the third in a series of muticultural, fear-eliminating teen novels, which includes Fear Ain't All That and Don't Be Afraid of Heaven.
Published: Aug. 1, 2006
ISBN: 978-0976837541

The Seventh Ritual: a race for survival, a novel for adults based on a true story A remarkable journey through fear, grit, discovery, forgiveness and triumph... with a few laughs in between. Synopsis "You must discover the cause of your unhappiness by the end of this year...or you will not live to see the next." Disgusted and disbelieving, 34-year old Paul Jacobson dismisses what he's told by a Greenwich Village psychic. Only days later, while running in the New York City Marathon, Paul's mind positions him back to a past he's never known. This journey begins the race for his life.
Published: July 4, 2009
ISBN: 978-0976837565