Growing up, Clinton Galloway and his family always felt it part of their responsibility to help the less fortunate in their community. After getting his CPA license, he moved from a large international accounting firm to Los Angeles for work at a Beverly Hills investment bank in the late 1970s.
Seeing the violence, poverty, and lack of education that were prevalent in South Central Los Angeles made Clinton and his brother, Carl, realize that they should try to make a difference for the area’s residents.
Cable television could be that difference. Cable would create jobs in L.A.’s poorest community and – with the right programming – could create better futures for its challenged residents. Clinton and Carl would devote their lives to making things better.
After more than a decade of work, a trip to the U.S. Supreme Court, and several small victories along the way, Clinton and his brother were unsuccessful. To make matters worse, in 1993, the U.S. Congress passed a law stating that regardless of the civil rights violations that had occurred during the cable television franchising - yes, there were many around the country - there would be no damages allowed against any city in the United States. This new law virtually terminated Clinton and Carl’s case and ended their cable TV journey. Corporations had shown their immense power over our government.
It was then that Clinton first considered writing a book chronicling their journey, but years of health issues in the family followed. The book was put on the back burner.
Eventually, in Carl’s final days (he died from leukemia in 2008), he convinced Clinton to move ahead with the book. At his brother’s urging, Clinton shares their story in Anatomy of a Hustle: Cable Comes to South Central L.A. (Oct 2012).
“I had to tell our story. The treatment by the officials at city hall was no different than being robbed by thugs on the street.” says Clinton. “And what’s worse: it hasn’t changed. The book confirms the public's suspicion that elected government officials are looking out for their own best interests and not those of the citizens. This corruption is especially significant in an election year.”
Clinton continues, “The damage being done to black communities by the dishonest political officials – who have remained in office for decades, by the way – may never be able to be corrected. For urban minority communities, the lack of employment or ability to engage in the economic system lies at the feet of elected black officials and civil rights groups, such as the NAACP, who have forsaken their constituency for their own financial well-being.”
Clinton is now president of Galloway & Associates and continues to live in Los Angeles. 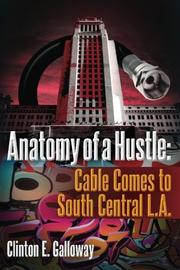 ANATOMY OF A HUSTLE

Cronyism and corruption stifle the cable TV industry in this hard-hitting memoir.

In the late ’70s, when the city of Los Angeles put up for bid the franchise to build a cable TV system for South-Central LA, the author and his brother partnered with an experienced cable company, lined up financing and assembled what they thought would be a winning proposal. Unfortunately, a good business plan turned out to be next to worthless in the tar pit of LA municipal politics. After a series of bullying meetings spiked with bribe offers, an aide to a powerful city councilman and an influence peddler connected to the mayor’s office demanded that they and their associates be given majority control of the prospective franchise. The Galloways, two local African-American businessmen, refused—and found themselves subject to an arbitrary, unfair evaluation process by city agencies that effectively pulled the brothers out of the running. (The franchise was finally awarded to a real estate company that had also, the author contends, tried to muscle in on the Galloways’ project.) Galloway follows the cable-franchise battle as it evolves into a lawsuit that revolved around significant issues of free speech rights and antitrust law, eventually leading to a landmark Supreme Court decision. Part true-life noir replete with threatening power brokers and sleazy backroom deal-making, part populist courtroom drama with pointed allegations of judicial bias, Galloway’s memoir is an absorbing insider’s take on the sort of cable TV franchise controversy that has erupted in many cities. His analysis of knotty business and bureaucratic and legal wrangling is both detailed and lucid, and he ties it to a larger critique of black leaders—including ugly portraits of former LA mayor Tom Bradley, celebrity lawyer Johnnie Cochrane and congresswoman Maxine Waters—whom he feels have betrayed their inner-city constituents. Galloway’s account is palpably bitter and one-sided, but it shines a powerful light on high-level malfeasance.

A stinging indictment of urban politics-as-usual.