Connie Bierkan is a writer of fiction and free verse. She is a new voice on the literary scene and her first Indie novel has been generously praised.

Constance grew up in Zürich and London, became fluent in French and German, attended Skidmore College and was awarded a BA in English Literature, with a minor in Semantics, from Goucher College in 1975.

As an adult, she loves to travel with husband, Kurt. They enjoy annual trips abroad, led by renowned historians, Victor Davis Hanson and Bruce Thornton, who are Hoover Institute Fellows. Trips have included Renaissance Italy (Tuscany); Berlin/Prague (World War II & Holocaust); and the Rhône River Valley (Caesar to World War II). Greece (Sparta to Alexander the Great) is on tap for 2019.

Constance is a member of DAR (Daughters of the American Revolution). Her ancestor, Gamaliel Townsend, whose family played a role in George Washington's spy ring, suits her passion for American history. She has served on several boards, run for the New Canaan, CT Board of Education, volunteered with elderly shut-ins, and raised two daughters. 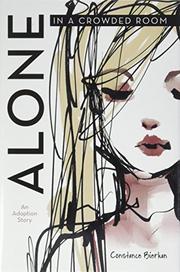 ALONE IN A CROWDED ROOM

This debut fictional memoir features an adoptee who yearns for her biological mother.

Lexie Saunders is 5 years old when she discovers that she is adopted. The scene is a heartbreaking one. Before tucking Lexie into bed, her adoptive mother explains to her: “I picked you out of a nursery of babies.” After reasoning that she has been abandoned by her biological mother, the young girl asks, “Didn’t she love me?”—a question that her adoptive parent cannot answer. As Lexie falls asleep, she confides: “So began a lifetime of missing Mama. It was like living with a hole inside me.” The book opens at an unconventional moment—on Dec. 26, 1951—six weeks before Lexie’s birth. She narrates her birth mother’s story from inside the womb, explaining the reasons that the baby has to be given up for adoption. She recalls “Mama” being escorted to a “home for unwed mothers” by Lexie’s embarrassed grandmother. Lexie’s biological father, disparagingly called “Junior Sperm Donor,” is also described evading his responsibilities and declaring his intention to marry another girl. The narrative follows Lexie’s coming-of-age, the bonds and rifts with her adoptive family, and her escalating desire to fill the emotional hole inside herself by finding her biological mother. In this self-assured first novel, Bierkan is a powerfully evocative writer, and the way she depicts the bond between mother and unborn child is uncanny: “I breathed the lavender she dabbed behind each of her ears after a bath while she stroked my bottom nestled just behind her belly button.” This sense of safety is brutally juxtaposed with Lexie being “unceremoniously dropped into the arms of the first of many faceless strangers” after her birth and the scent of lavender growing “more and more faint.” In this poignant work filled with emptiness, loss, love, and hope, the prose is startlingly realistic, and readers will be forgiven for mistaking the book for nonfiction. The result is a deeply affecting story that may prove a source of comfort to those with similar adoption experiences.

A masterful adoption tale: heart-rending and life-affirming in equal measure.

Those Who Save Us

ALONE IN A CROWDED ROOM: AN ADOPTION STORY: Kirkus Star

A Flight of Poems: A Collection of Poems

Everyone has a story, a lifetime of memories to preserve or share with others. As life becomes more hectic and cluttered, it is vital to record our points in time...
ISBN: 978-1-62137-914-0 (hardcover)