Three time Independant Publisher award winner Cora Holmes started her writing career with Reiman Publications at Country Magazine. Her first two books, Goodbye, Boise-Hello, Alaska, and "Dear Cora..." were published by Reiman Publications and sold nearly one hundred thousand copies. When Reader's Digest bought Reiman Publications in 2002 she started her own publishing company, Legend Books, and has published five books under that logo. After living in Alaska's Aleutian Islands for thirty-seven years she now divides her time between Idaho and Alaska where she is continuing the Aleutian sheep ranching history that covered much of the last century. She grew up in Idaho were her family moved frequently in the impoverished post WWII years. She turned to books for friends who didn’t change with the logging towns and country schools- sharing in Jane Eyre’s loneliness, and suffered the Civil War with Scarlett O’Hara. By age eighteen she was a hopeless romantic. Following high school she became a registered nurse specializing in neonatal intensive care. This education surfaces in her books as realistic portrayals of human drama and love evolving from adversity.

“A book that offers pleasures of recognition and revelation for devoted fans of Jane Eyre.”
– Kirkus Reviews 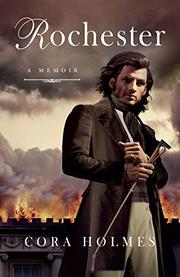 This retelling of Charlotte Brontë’s classic 1847 novel opens on Rochester’s first encounter with “Miss Eyre,” his ward’s governess—whom he notes “doesn’t look above a child herself, a fairy creature”—on the road to his ancestral home, Thornfield Hall. Although he’s soon captivated by Jane’s unflappable manner, unusual beauty, and paintings—“fierce, raw, full of nature’s violence and something more, something otherworldly”—he’s constrained by his marriage to the insane Bertha Mason, who’s hidden on Thornfield’s third floor. Although he deeply resents being tricked into marrying Bertha as a young man, he sees her confinement as a merciful alternative to an asylum where “the shackles never come off.” Overall, because this book’s plot and sensibility are so closely interlocked with Jane Eyre’s, it may be less rewarding for readers unfamiliar with the source material. For example, in addition to Rochester’s past, Holmes fills in new details about his estate management, showing his generous aspect as well as the practical details of Georgian country life, including the threat of his workforce immigrating to America. The novel’s frankness about Rochester and Jane’s sexual attraction isn’t uniformly graceful; for example, there’s something jarring about Jane communicating her breathless realization to Rochester that they will be joined “by [their] nether parts.” However, the author does enhance the sense of Thornfield as a grounded, vivid place. The first-person narration captures Rochester’s wry cynicism, juxtaposing it with his more vulnerable thoughts. As he and Jane become closer, he has increasing difficulty concealing the evidence of his wife’s violent rages. Bertha’s heritage “of idiots and maniacs” is compounded here by the revelation of multiple generations of incestuous family history. This further entangles Bertha’s madness with Gothic obsessions with sex, bloodlines, and purity; here, she’s rendered so monstrous that, for all his suffering, Rochester gets off the hook a little too easily for his attempted bigamy.

A book that offers pleasures of recognition and revelation for devoted fans of Jane Eyre.

Killian and the Bell

Time of the Otter