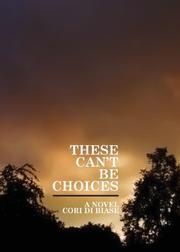 THESE CAN'T BE CHOICES

In this beautifully written debut novel, a loner hides from the world, other people and his past until a chance relationship sends him spiraling toward a confrontation with inner demons and the outside world.

Ben floats, adrift in a world of routine, solitude and ennui. Reminiscent of Sartre’s Nausea (1938), the intimate prose conjures this outsider’s life into stark reality. Readers are thrown drowning into the maelstrom that is his mind—a mind constantly churning, focusing in microscopic detail on every word, deed and nuance. “He tried to think of something more to say. He was supposed to say more. But he couldn’t think of anything, and the weight of saying nothing got heavier and heavier until it was like a panic.” For Ben, life is like a bad acid trip, and Di Biase drags the reader along for the ride. The story is divided between the present and flashbacks in which Ben is referred to as “the boy,” who is as introspective and self-conscious as the man, though somehow fresher, as if things today didn’t have to be this way. In the present, Ben is a mechanic at a Washington, D.C., garage, where co-workers call him Cornpone. “Ben liked working. Not having to think.” He prefers old cars and keeping to himself; at night, he sits at home drinking Maker’s Mark. Sometimes he goes to a bar where patrons call him President Taft. There, he meets Maria, a woman much like his mother. Ben resists but falls into a relationship with her and meets her daughter, Sophia. Throughout, Di Biase builds tension that reverberates and tightens, ever alluding to some unnamed crime Ben committed as a boy. “It might have been different. If he’d turned out differently, or if he hadn’t done what he’d done.” The writing mirrors Ben’s agitated state, infecting readers with his anxiety. Put squarely inside a troubled mind, readers can’t escape the fearsome knowledge that something bad is coming.

THESE CAN'T BE CHOICES: Kirkus Star

THESE CAN'T BE CHOICES: Named to Kirkus Reviews' Best Books, 2014