D. A. Belmont knows Fort Lauderdale intimately, what goes on undercover as well as under the covers. Belmont's wisely squandered youth was spent in Florida's "Venice of America" and wildly in other enthralling fleshpots north and south of the equator. Fort Lauderdale is a captivating place, a bejeweled cesspool of sleaze that makes Vegas look like a Shaker settlement.

Diamondacious! is D.A. Belmont's first published book. It was inspired by the Titans: Grace Metalious, Harold Robbins, Jacqueline Susann and Sidney Sheldon. The giants may be gone. They are not forgotten.

“The tongue-in-cheek commentary on the lifestyles of ostentatious modern-day Americans is what makes this novel so delightful.”
– Kirkus Reviews 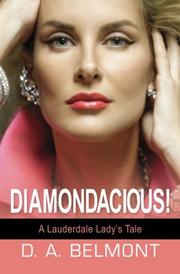 Debbie DeVore Vargas Helmut wants her life to be “diamondacious,” a word she invented as a child that means “cool, rad” and “full of diamonds.” She grew up in the bad part of Fort Lauderdale—away from the glitzy affluence of Southern Florida but close enough to long for its glamorous lifestyle. A smart, ambitious young lady, she applies herself to her schoolwork and strives to be accepted at Duke University, her dream school. She envies her privileged peers, specifically Arden Sloane, a blonde, beautiful, pedigreed tennis champion who takes a liking to her. As the novel progresses, it introduces many secondary characters, creating a full, rich community of people associated with the “diamondacious” lifestyle. Belmont’s voice is witty and lascivious, at once praising and scorning the artificial opulence that the characters so desperately desire (“She hired a succession of handsome, very personable personal trainers. Sometimes, they even made it to the gym”). As Debbie sees it, life is a gamble: “We’ve done okay at life’s casino so far—gotta know when to hedge your bets.” The story fills out Debbie’s life story with various cultural and political references relevant to the various time periods, including the AIDS epidemic and the 9/11 terrorist attacks. Parts of the novel sag due to the overuse of business jargon, which, while ambitious, takes away from the fun. The tongue-in-cheek commentary on the lifestyles of ostentatious modern-day Americans is what makes this novel so delightful.

A sharp look at the modern-day American obsession with the lifestyles of the glamorous.