D. Throop is an amateur cook, fan of old comedies, and a sucker for classic rock 'n roll. He hopes to become a successful author, elder statesman, and notorious philanderer--kinda like Ben Franklin. 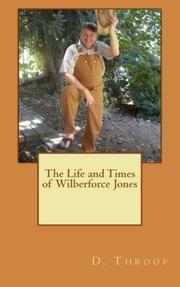 The Life and Times of Wilberforce Jones

Throop’s (Lizard Quest, 2011) second novel delves into the life of the eccentric title character and his equally curious friends and neighbors in a small country town.

When a journalist is told by his editor to leave the city and become a “rural correspondent,” he initially balks at the idea, but financial inducements and curiosity get the better of him. At his assigned destination he meets up with Cletus Jones, a “large, muscular, corn-fed country boy” who begins to tell him about his distant cousin, Wilberforce Jones, a man who’s led a remarkable life. For example, Cletus recounts a time that Wilberforce resolved to commit suicide by contracting food poisoning from local Mexican restaurants; he was dejected by the fact that his domestic partner had left him and because he was in debt from a scheme to win big at bingo. Unsurprisingly, the suicide plan failed, but Wilberforce used the experience to develop a recipe for salsa that became a successful, lucrative brand. Cletus also describes an incident in which Wilberforce became a preacher to a congregation that believed that a young celebrity (with a racy, leaked video) was an avatar of God. But Wilberforce isn’t the only person of interest here: Cletus also tells the story of Dennis Haney and Tad Elliot, two fellow townsfolk who gave a series of lectures denying that NASA astronauts actually landed on the moon, which culminated in a legal showdown. Throughout the novel, Throop manages to keep the many characters and occasionally tangential storylines in clear, comprehensible order. As the primary storyteller, Cletus is as engaging and unusual as any of the people he describes. The author also gives the provincial, but unnamed, town a strong sense of place. His liberal use of rural dialect may be distracting to some readers, however, and although the journalist/narrator is a learned city man, his occasional florid turns of phrase strain believability: “Without any outward show of rancor at my attempted sally of wit, Cletus resumed his story.” Most readers, however, will choose to overlook these minor transgressions and embrace this congenial novel’s charm.

A winsome tale that puts its quirky, rural characters on full display.