Multi-Award winning fiction author and graduate of Fordham University, Dale has held several senior positions in Fortune 250 companies and has traveled the world. A black belt in martial arts, avid fly-fisherman, and political junkie, the creative storylines of his novels reflect the many aspects of his diversified life.

When Dale Allan was just twelve years old, his father was murdered while away on an extended business trip. A week before his death, Dale had struggled to write a letter updating him on the family’s activities. When his father was buried with the handwritten note in his pocket, Dale fully understood the power of writing.

“An engaging mystery, and a sizzling debut.”
– Kirkus Reviews 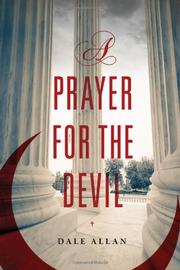 A PRAYER FOR THE DEVIL

In Allan’s debut thriller, a priest aims to find the people responsible for his brother’s murder, whatever the cost.

An explosion at a political rally kills a popular presidential candidate, a Muslim reformist and a lawyer who had Senate aspirations. However, authorities are baffled as to which person was the intended target of the terror attack. The lawyer’s twin brother, Luke Miller, a Catholic priest raised in a Jewish household, becomes a media celebrity in the aftermath of the tragedy, and he spends much of his day dodging paparazzi. The press’s fascination is understandable; after all, Luke wears his brother’s clothes, drives his brother’s car and goes out in public with his brother’s widow. He decides to look into the bombing on his own, even though his investigation may ultimately put other people’s lives in jeopardy. Allan’s novel is a blistering tale with all the right ingredients for a mystery—for example, Luke’s prodding reveals more questions, such as why Luke’s brother had been carrying a gun. But the author’s multifaceted characters are what give the book distinction. Luke is a bracingly ambiguous character, prone to violent retorts and wracked with guilt over the fact that he and his brother had not been on the best of terms. The novel also addresses Luke’s ties to the cloth, as his need for retribution makes him question his faith. The story is full of complex relationships; for example, Luke is indisputably attracted to both his sister-in-law Deborah, and the Muslim reformist’s sister Jami. Luke encounters many dead ends and red herrings, but they always feel like steps closer to a solution rather than throwaway pieces of a puzzle. The book’s stellar ending addresses a lingering uncertainty and leaves much for readers to ponder.

An engaging mystery, and a sizzling debut.

A PRAYER FOR THE DEVIL: Kirkus Star

A PRAYER FOR THE DEVIL: Foreword Reviews - BOOK OF THE YEAR WINNER, 2013

A fast–paced, brilliant thriller that literally begins with a bang and never lets up!, 2013 A Novel Approach to Terrorism and Religion, 2013 Unabashed plug, 2013 A Prayer For The Devil

A Prayer For The Devil - SCREENPLAY

Kim was murdered last week. The police said this was no ordinary murder...too strange and too horrific. And what in the world was she doing in the place her body was found? Being an only child with two deceased parents, the killer probably thought that no one would care – but he didn’t count on Gabby. Can a trust fund child from the exclusive Gold Coast of Long Island unlock the keys to her best friend’s murder? How well did she really know Kim? Did her friend have a secret life? Will this investigation lead her back to the man she once loved so deeply, but now despised so much? Habitual Sin, Dale Allan’s third novel, will keep you riveted as you explore secret lives, broken promises and undeterred quest for justice. Will Gabby’s journey into unimaginable darkness unexpectedly rekindle her faith? Open the book - hold on - and prepare to be captivated!

It Could Happen To You - Complete Professionally Edited Novel - 108,000 Words

Life just couldn’t get any better for John Morgan! A senior executive at a successful company with a beautiful honor student daughter and one home on long island and another house in upstate New York – Until… An innocent Good Samaritan act leads to a chance encounter with diplomat’s criminal son and a rogue video posting on YouTube, igniting an avalanche of bizarre events including: murder, government corruption, diplomatic immunity, romance and celebrity. Unforeseen twists of fate will keep you glued to this compelling novel as you attempt to figure out what will occur next, while eerily realizing that what happened to John Morgan could easily happen to you.