When he was 10 years old Dan was struck by an idea for a story. Thirty-nine years of education, including a History degree from the University of Notre Dame, family life centered around his wife and two kids, and hard work at the day job, have cultivated that idea into his debut novel.

“A winning debut fantasy that succeeds at being both graceful and turbulent.”
– Kirkus Reviews 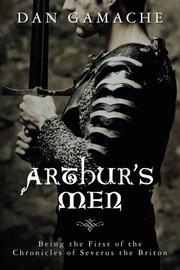 This historical fantasy debut sees King Arthur’s peaceful reign threatened by savages and questioned by a mysterious band of horsemen.

Under the leadership of Sir Gawain, the famous knight of the Round Table, a soldier named Severus survived the battle at Mount Badon. There, King Arthur took a stand against the Saxon hordes and ushered in an era of lasting peace. Nine years later, Severus and his wife, Olwen, keep a farm and large family near the village of Glevum. One night, Saxon raiders, commanded by warlord Mil the Black, torch the family’s home. Severus is killed but he continues to view events in spirit form; specifically, he witnesses five black-garbed horsemen intervene on behalf of the innocent Britons. These skillful riders—William, Nikolas, Yusef, Dmitri, and Andre—turn back the Saxons, giving them wounds to remember them by. King Arthur, along with his Round Table knights, has retired from dangerous battle, but he hears of these heroic riders and wonders whom they might be. Some knights, such as the valiant Gawain, want to re-enter the fray as well, while others believe that the Britons should fight for themselves. The five horsemen are happy to establish their own battlefield supremacy—so long as they’re never forced to kneel before Arthur. If alliances are to be forged, however, they must happen quickly, as Mil the Black will soon have Irish and Pict warriors under his command. Author Gamache does the Arthurian myths proud with this rousing debut. He portrays classic characters such as Guinevere and Morgan le Fay with emotional, scholarly insight, as when the former says that the Britons “owed [Arthur] more than they gave him. And he let them forget their debt.” The best lines, though, are reserved for Gamache’s own creations; the noble William, for example, says to Severus’ family, “Land is nothing....Your treasure is each other.” Also, the author makes clever use of Severus as a ghost who can travel great distances from scene to scene. Gamache puts the final polish on his epic with incredible battles and a remarkable wizard/counselor named Morys.

A winning debut fantasy that succeeds at being both graceful and turbulent.

"It is our choices, Harry, that show what we truly are, far more than our abilities."

Spending time with my family