Dan T. Cox was born in 1953 in Corvallis, Oregon. He grew up in Oregon’s North Santiam Canyon, earned a journalism degree from the University of Oregon, became part of Portland’s advertising creative community, and now lives in Ridgefield, Washington. His short fiction has appeared in literary journals such as Weber Studies and Skyline. A Bigger Piece of Blue is his debut book.

“Cox creates an impressive array of characters and voices…and he pulls them all off elegantly. His characters are imperfect, often scarred, and always struggling—and therefore believable. Cox not only constructs immediate, vibrant scenes, but also widens his focus to show the effects of specific choices over lifetimes.”
– Kirkus Reviews 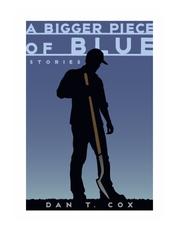 A BIGGER PIECE OF BLUE

A loosely connected series of stories about chance, choices, and families.

In the title story of Cox’s debut collection, 18-year-old Creighton Bliss meanders home after a summer job in Oregon in 1950. Near a filbert farm, he spots Ella, who’s older, beautiful, and “on the slow side.” It becomes a tale of trust, if not love, at first sight. Later, when Creighton finds a wounded Ella in the same filbert field, he goes after her assailant and does something that ties him and Ella together forever. Although Creighton, the filbert farm, and Oregon settings appear in several of the other 12 stories in the collection, they’re linked more by theme than by plot. Specifically, they’re concerned with wayward, incompetent parents and their legacies. In “Night Paving,” Elsie Bly takes a job as a flagger with a road construction crew. She fantasizes about being killed on the job but she believes that no one—not even the man she once called “Father”—would cry. In “Bitter Parents of Untalented Children,” Carol and Bill offer an elaborate, macabre toast to their abusive mothers. The longest, most developed story, “Splendid Purpose,” tells of two couples sharing a dinner in 1965. Their marriages are troubled, but their lives seem inalterable. Then a green orb inexplicably appears in the sky, which causes the couples’ relationships to either ascend to loving acceptance or descend into depravity—and their decisions go on to affect their children. Cox creates an impressive array of characters and voices, including the illegitimate daughter of Rita Moreno, and he pulls them all off elegantly. His characters are imperfect, often scarred, and always struggling—and therefore believable. Cox not only constructs immediate, vibrant scenes, but also widens his focus to show the effects of specific choices over lifetimes. His occasional plot-twist endings, however, seem unnecessary given the overall depth of his tales.

A well-crafted debut that explores intended and unintended consequences.

THE CANYON CUTS BOTH WAYS

A collection of interwoven short stories set in a remote, rural Oregon community.

Cox (A Bigger Piece of Blue: Stories, 2017) has pulled together 16 tales in this collection, which mostly take place in and around North Santiam Canyon, in a “community that’s dominated by logging and family farms.” Descriptions of the manzanita, Douglas fir, and juniper trees create a convincing portrait of the isolated, tall-walled canyons and remote terrain. The characters are loggers, bartenders, firefighters, and ne’er-do-wells trying their best to navigate their social and physical environs. At its best, Cox’s storytelling illuminates human truths and offers keen insight into the human experience. One of the most compelling stories here is “A Night by the Fire,” in which plywood millworker George Howard and his co-worker and hunting companion Ivan Thrower go on an overnight hunting trip to backcountry Tumblejack Mountain. While navigating unfamiliar terrain without a map, the pair inadvertently split up just before the weather takes a turn for the worse. A night apart in the wilderness changes the nature of their trip, and their friendship, for good. Cox’s insight into human psychology shines brightest here. However, other pieces feel underdeveloped and could have benefited from richer detail or better structuring. Some tales suffer from confusing plotting, unnatural dialogue, or awkward, distracting use of dialect, as in “The Taverner Place”: “I look up at the mountains facing the house and think about how he musta done the same. How he mighta sat there with a cup of coffee.” Nevertheless, these stories convey a strong sense of the region, and most of the characters are written with depth and realism.

An uneven set of tales that still captures the strong spirit of Oregonians in the Cascade Range.

"I'm comfortable with dust and practical as gravel." -- Creighton Bliss, from the title story, A Bigger Piece of Blue