Dan “Tito” Davis grew up in a family of seven in South Dakota. After years of dealing drugs; time spent in prison; two marriages and a whole lot of living in between Tito was set up on false drug charges by a long time friend. Faced with 30 years in prison for a crime he did not commit Davis went on the run for 13 years avoiding federal law enforcement across multiple countries and continents. Black-bagged in 2007 while living in Venezuela (extradited without an agreement with the country) Tito served 105 months in prison. He was released in 2015 and now lives in Key West, Florida where he is part of the local writer’s guild and enjoys fishing, playing pickleball and bicycling around town. GRINGO is his first book.

“This memoir is written with an intense, electrifying energy; for example, when Davis is finally caught by authorities in Venezuela, he says, “I had sworn early on that the only way I would return to America was with pennies on my eyes or in handcuffs.””
– Kirkus Reviews 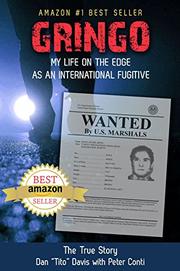 A drug trafficker recounts his life on the lam in this debut memoir.

Growing up in a small South Dakota town where boys “aspired to be Daniel Boone, not Kanye West,” Davis’ life dramatically changed when he left home in 1974 for the bright lights of Las Vegas. As a college student, he started manufacturing “White Crosses” (speed pills) and soon recruited the local Bandidos motorcycle gang to distribute his supply. His decision to enter this volatile, dangerous world ushered in a period of extreme wealth, as he earned close to $200,000 per week selling the drug. But then he was caught by authorities and incarcerated—ironically enough, for selling marijuana, a far less expensive and less lethal substance than speed. He avoided this conviction, however, by jumping bail and slipping over the border into Mexico undetected. During his many years on the run across Central and South America, he found some unusual ways to hide out: with the infamous Colombian Medellín drug cartel, in Panama’s mostly uncharted Darien Gap, and even, briefly, in Fidel Castro’s Cuba. Desperate to stay one step ahead of the American authorities (federales), Davis falsified his identity and moved often from city to city to avoid arousing suspicion: “I was a fugitive with a stolen fake passport….I was trying to con a con,” he writes. This memoir is written with an intense, electrifying energy; for example, when Davis is finally caught by authorities in Venezuela, he says, “I had sworn early on that the only way I would return to America was with pennies on my eyes or in handcuffs.” Co-author Conti (Whatever Happened to Martin Barnett?, 2016, etc.) helps to hold things together in a strong retelling that addresses the many complexities of Davis’ life story. The narrative is propelled by sharp, energizing prose that firmly holds readers’ attention as they’re plunged into the dramatic, unstable Central American drug circuit. For those who are uninitiated into this elusive milieu, the book offers robust context that combines with the larger narrative and truly enriches the story of a life lived on the edge. A fast-paced, thrilling work about navigating the dangerous drug trade.