Daniel C. McWhorter (“Dan” to everyone who knows him) is an avid reader and life-long science fiction and fantasy fan who has long dreamed about writing for a living.

As is the case for many of us, the realities of life took him in a different direction and his dream was put on hold while he worked to achieve successful careers in telecom, software engineering and talent development. In 2017, Dan decided to leave corporate America and start writing. His first book, Restoration, was the result.

Dan lives in the beautiful mountains of North Georgia with his wife and three dogs. When he's not writing, he likes to hike, boat, fish and experience the exceptional beauty of the Blue Ridge Mountains. If the weather is bad, you may find him online playing the current MMO flavor of the month or banging away on his Xbox controller.

“An insightful dystopian tale with dynamic characters and a surfeit of surprises.”
– Kirkus Reviews 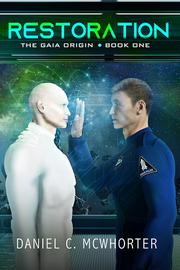 A scientist in the late 21st century awakens her cryogenically frozen grandfather for his expertise—an illegal act that puts global authorities on her trail—in this sci-fi debut.

A few years after losing his wife in a plane crash, terminally ill Dr. Evan Feldman hopes he can return from the dead someday. This is a possibility, as his company, Telogene Life Sciences, has secretly developed cryogenic suspension technology. Fifty years after Evan’s death, in 2075, his granddaughter, Dr. Aubrey Harris, is there at his restoration. But there are a few snags. For one, damage to a storage facility resulted in loss of genetic material, so Evan’s “engramic archive”—essentially his digitized memories, thoughts, and feelings—is in another body. More significantly, as the Human Dignity and Decency Act passed anti-cloning legislation two decades earlier, Aubrey and Telogene are breaking the law. While Aubrey is ensnared by the authoritarian Global Federation of Nations, her colleagues Dr. Chen Li Hao and Yin Li evade GFN’s jurisdiction by taking Evan to Luna (aka, the moon) and later Mars. The restored Evan can assist in overcoming a lethal genetic mutation among humans, but the real reason he’s awake involves abundant secrets and may leave him questioning the repercussions of his extended life. Though McWhorter’s novel thrives on mystery and unveiling twist after twist as the story progresses, it also boasts sci-fi trademarks. For example, Earth has been ravaged by worldwide drought and famine, and there’s plenty of chic tech, such as minidrones linked to optical implants. Furthermore, the plot shrewdly tackles the oft-posed question about humans (Do they have souls?), highlighted by Chen’s convincing argument that people are defined by their energy, not their physical forms. The author establishes a steady tempo (intermittently inserting bits of backstory rather than revealing it all at once) and provides most characters with personalities, including the GFN police, or Peacekeepers, pursuing Evan and the others. Despite some finality by the end, there’s a clear setup for a sequel.

Insightful dystopian tale with dynamic characters and a surfeit of surprises.