Daniel Ross Madsen was born and raised in Wichita, Kansas where he resides with his wife. Madsen graduated summa cum laude from Wichita State University. He wrote The Iron Couch, his first novel, after abandoning a career in corporate America, where his feet had been firmly planted on the ground, but his eyes had always been looking out the window. Since he was eleven, Madsen's had stories roaming the hallways of his imagination looking for a way out. When he’s not reading or writing, he’s absorbing current events. Madsen is also a die-hard do-it-yourselfer, and says there is no job too big or too small for him to dive into, mess up, and call in the pros.

“Madsen intelligently orchestrates science, psychology, and parapsychology for the plausibility this tale needs. . . . But it’s the human elements that give it real strength . . . . An entertaining psychological and scientific thriller with a satisfying finish.”
– Kirkus Reviews 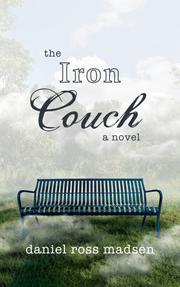 In this debut novel, a professor tries to recover lost memories centering on his invention, a quantum computer with amazing properties.

Simon Hensley, a professor of computer engineering and physics who also conducts research in artificial intelligence, has psychogenic amnesia; he can’t even remember checking himself into the mental hospital where he now resides. Hypnosis slowly reveals details: there was an accident; he fell in the ocean, far from his landlocked state; he’d had an invention, a machine, with him, now lost. Over time, Simon pieces together more memories. He’d invented a portable quantum computer capable of learning, adapting, and even intuiting, one that could save the world with innovative solutions to problems. Tracking down a signal from his new machine, Simon comes upon a group séance. Though deeply skeptical, Simon finds that his machine seems to confirm information from the séances. Astonishingly, Simon realizes, he’s “invented the world’s first mechanical device that could communicate with the dead.” At first thrilled by the possibilities—conversing with the great minds of history; talking to his parents again—Simon becomes fearful when warned that the invention will make him a “marked man”: “There are many who will want to control your machine for their own purposes.” When two people close to him die and his workshop is ransacked, Simon is convinced he must destroy the machine. In his novel, Madsen intelligently orchestrates science, psychology, and parapsychology for the plausibility this tale needs, giving it a robust underpinning. It also works well as a kind of detective story, with Simon pursuing memory clues and evidence. But it’s the human elements that give it real strength, elevating it above speculative what-if abstractions. Simon has Asperger’s and finds it difficult to make friends and nearly impossible to talk to women; he’s never been on a date. His attraction to warm, kind Andrea Siannas, who served as a “placebo” (fake psychic) in the séances and also lives near the mental hospital, helps bring him back to sanity. Simon’s thirst for knowledge, his earnestness, and his desire to connect with other minds are all appealing qualities.

An entertaining psychological and scientific thriller with a satisfying finish.

The Gargoyle, The Nix, The Baker's Secret, Aftershock