Dante Paradiso is a writer, lawyer and career Foreign Service Officer who has served extensively in Africa and Asia. He is the author of "The Embassy: A Story of War and Diplomacy" (Beaufort Books, New York (2016)), a nonfiction book about U.S. and West African diplomatic efforts to end the Liberian civil war, and "The Pure Life" (Xlibris (2005)), a novel. He has contributed opinion pieces to the online editions of Foreign Affairs, the Daily Beast, Global Geneva, National Geographic Voices, and, through the Tribune News Service, the Miami Herald, the Tampa Tribune, the Akron Beacon Journal and Newsday, among others. He has also appeared on CNN.com and Time.com. Prior to joining the U.S. Department of State, Mr. Paradiso practiced financial services and bankruptcy law with Goodwin Procter LLP in Boston. He has served in the Peace Corps (Kenya) and in the California Conservation Corps. Mr. Paradiso received his J.D. from the University of California at Los Angeles and his B.A. in Political Science from Yale University, after preparing at The Horace Mann School. He also studied Mandarin at the Chinese University of Hong Kong. He is a recipient of the State Department's Heroism Award (group) and Superior Honor Award, as well as the Navy Distinguished Public Service Award and the Army's Superior Civilian Service Award. He comes from New York City and when not on assignment makes his home in Portland, Oregon with his wife, son, and dog.

“He has a novelist’s sense of pacing and character... A compelling account of an obscure international crisis.”
– Kirkus Reviews 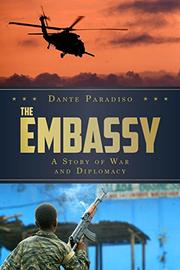 Paradiso (The Pure Life, 2005) tells the story of how the staff of the American Embassy in Monrovia attempted to halt the second Liberian civil war.

By the summer of 2003, “the Liberian civil war had lasted three years, or thirteen, or twenty-three, depending on how you counted.” As two different rebel armies approached Monrovia from different directions, the government of the corrupt, violent president Charles Taylor was struggling to hold onto power. The capitol was filled with militias loyal to Taylor, including units composed of child soldiers, whose unpredictable behavior made them as fearsome to the local populace as the rebels on the city’s outskirts. When word reached Liberia that an international criminal court was seeking to indict Taylor for war crimes, the fragile situation exploded: the rebel armies attacked and plunged Monrovia into heated combat. The last bastion of reason and hope for the city was U.S. Ambassador John William Blaney III and his team, holed up in the American Embassy. As the neighborhoods around them descended into chaos, this disparate group of diplomats, soldiers, and contractors worked to broker a cease-fire and provide a beachhead for the West African peacekeeping force that was attempting to restore order. Paradiso’s book tells a story about people who took on the seemingly impossible task of keeping all hell from breaking loose. He has a novelist’s sense of pacing and character, assembling the story from the perspectives of the various people involved—from those who witnessed the events from the embassy offices to others in the streets of the capital. Paradiso’s prose captures the surreal landscape of his subject, although he takes pains not to exoticize or romanticize the various groups involved: “The world press, which otherwise ignored the country, was quick to run images of child fighters dressed in lurid wigs and wedding dresses, wearing necklaces of human fingers.” Overall, this book offers an engaging story that will be unfamiliar to many American readers as well as a nuanced look at the grittiness and complexity of war and diplomacy.

The Warlord and the Ambassador, 2017 Foreign Service Officer Discusses the Role of Diplomacy in the Midst of Conflict, 2016 In "The Embassy," Portland Diplomat Goes Behind the Scenes of Liberia's 2003 Civil War, 2016 New Book Highlights Role of Amb. John Blaney (MSFS '76) in Ending Liberian Civil War , 2016

If character is fate, The Pure Life paints the connection between who we are and what we do, and shows that everyday living, filled as it is with our inadvertent and deliberate actions, has consequence. After college graduation, Jackson Dean heads for the Pacific Northwest to build trails with the California Conservation Corps. He finds himself on a crew alongside Marcus, a young, streetwise Othello, Rebecca, an aspiring artist, Desiree, a privileged dropout, and Bane, a mercurial figure who seems to operate in the shadows of the experience. The work is labor intensive, and the outward journey, inward. Jackson and Rebecca fall for each other but immediately face an indefinite separation. And, when Marcus gets a call from his old gang, Bane's machinations implicate Jackson, Rebecca and Desiree in a subtle intrigue that leaves each of them facing stark choices between loyalty and pride, loss and love.
Published: Dec. 14, 2005
ISBN: 0-7388-5914-1