Dave Gordon was born in the foothills of Mt. Laramie in Wyoming. He grew up in eastern Washington State in Yakima, graduating from Marquette Jesuit High School, located there, and later from Gonzaga University in Spokane, Washington.
Leaving the Catholic Church
After leaving the Catholic Church in the late 1960s, it took him thirty years of searching to discover a spiritual practice that made sense. As the new millennium arrived, he began visiting Zen monasteries, and became a lay-ordained a Zen Buddhist monk in 2011. Dave continues his personal practice and studies with a local teacher.
Dave retired from forty years of mountaineering, although he still enjoys alpine backpacking and the occasional mountain “scramble”. He was a climber on the North Ridge 1995 Mt. Everest Expedition, an independent expedition organized by the climbing team.

“Particularly for readers interested in pursuing their own spiritual development, Steve’s story may serve as a useful and enjoyable model.”
– Kirkus Reviews 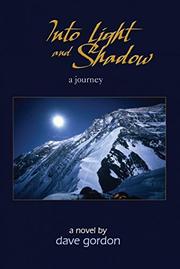 Into Light and Shadow

Steve Forrest is a quintessential go-getter. From his career as a high-powered corporate lawyer to his passion for mountaineering expeditions, Steve relentlessly pursues his goals. It’s only after a near-lethal accident on the slopes of Mount Everest leaves him partially paralyzed that Steve recognizes his life as a shallow “exercise in ego.” Fired from his soulless job, served divorce papers by his embittered wife, and reeling from the loss of his mobility, Steve is forced to focus on what he calls the Light: a sense of all-consuming love that surrounded him during his accident and showed him the errors of his previous lifestyle. Guided by Father Jack, a preternaturally wise Catholic priest/psychotherapist/Zen Buddhist he meets in the hospital, Steve embarks on a quest to redeem his misspent life. Gordon tracks Steve’s experiments with an array of spiritual traditions, from Christian mysticism to Chinese qi gong. Along the way, Steve repairs his relationships with his children, joins an environmental law firm, and reconnects with his Native American roots, among other admirable accomplishments. Despite his ostensible struggles, Steve’s success seems preordained from the outset; he tidily overcomes each new obstacle in his path, steadily progressing toward enlightenment. Rather than fully realized individuals, the supporting characters, particularly all-knowing Jack, read as plot devices tailor-made to enhance Steve’s growth. Much of their dialogue is rather unrealistic: “I suspect the terror you’ve been feeling is rooted in your ego.” However, what the book lacks in character development and narrative tension, it makes up for in philosophical sophistication. Gordon is clearly knowledgeable about the religious concepts that Steve encounters, and his explanations of them are clear and engaging. Though he draws heavily from Zen Buddhism, the author’s omnivorous, nondenominational take on spirituality is refreshing, and he deftly balances and integrates each of the many traditions that come into play. Particularly for readers interested in pursuing their own spiritual development, Steve’s story may serve as a useful and enjoyable model.

Successful as a parable; less so as a novel.