Connect with David A. Collier

David A. Collier joined the faculty at Duke University. Later he taught in the business schools at The Ohio State University, the University of Virginia, Ohio State University, Florida Gulf Coast University, and the University of Warwick in the United Kingdom. After decades of authoring research articles, business cases, and five college textbooks, he wanted a new challenge--novels. The Entity: 2147 is the first in a series of science fiction novels (www.theentity.us). He dedicates this novel to those who love this tiny speck of wonder called Earth. Collier currently resides in South Florida with his wife and two dogs. David is an avid sports fan, and if time permits, he reads astronomy, sustainability, and science literature. Novel Tag Line: With earth ravaged by heat and flood, an entity arrives offering a solution. The promise of rescue is now within reach, but humanity must overcome its greatest obstacle: itself. Novel Synopsis: On a pleasant evening in October 2147, Tom Hickory relaxes on the sofa beside his wife. Suddenly, a brilliant flash of light illuminates the pristine farmland surrounding their home near Lexington, Kentucky. Startled, Tom steps outside to investigate. He is the first to encounter the entity-and his life will never be the same. The devastating effects of climate change are unforgiving. Millions succumb to extreme heat and rising ocean levels. Humanity and the earth have passed the tipping point. As humanity faces impending doom, the entity arrives. But the burden of salvation falls on the shoulders of the Hickory family as fractured nations, ignorant governments, and ravenous media grapple with the entity's arrival. Humanity must come together to accept the entity's challenge-or face extinction. Does humanity have the political will to solve the global climate crisis? Is the adversary inadequate technology, the universal laws of thermodynamics, or humankind itself?

“In Collier’s debut sci-fi novel, set in the mid-22nd century, a Kentucky farm family is changed forever when a strange object lands on their property, promising a solution to the urgent problem of climate change.”
– Kirkus Reviews 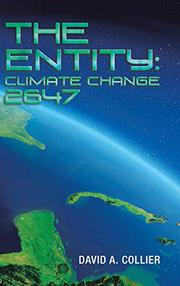 An entity returns to Earth to once again aid the dying planet in combating climate change in this SF sequel.

By the mid-27th century, climate change has devastated Earth. The Paris family lives in Florida, most of which is underwater due to rising sea levels. Twenty-two-year-old Kutter Paris, who joins the United States Army, witnesses Africa in a chaotic state, as everyone fights about water. Back in America, his mother, Vela, and teen sister, Livia, see the intense heat cause “hundreds of birds” to fall from the sky. Things take an unexpected turn for the two women when they manage to film a strange, luminescent blue orb. Suspecting it’s the entity that visited Earth 500 years ago, they send the video to the federal government. This enigmatic being had provided a plan and blueprints for 216 “megamachines” to reduce greenhouse gases. Unfortunately, humans didn’t complete the plan and allowed climate change to continue its damage. The Federal Intelligence Agency, believing the entity will visit Vela and Livia again, keep the two under heavy surveillance. They all await its return, hoping this time earthlings will follow the entity’s instructions and save their planet. While Collier details futuristic tech in his SF tale, he zeroes in on the human aspect. For example, one of Vela and Livia’s biggest dilemmas is the FIA unabashedly invading their privacy. At the same time, the entity is largely a mystery—some are certain it’s divine—though the ending gives an inkling as to what it is. The engaging story is educational and free of condescension; much of climate change’s effects in 2647 are reality-based, including thawing ice and permafrost, which release dormant viruses, and acidic ocean water. Meanwhile, the author’s prose, though only moderately descriptive, is persistently clear and concise.

A breezy and enlightening environmental tale. 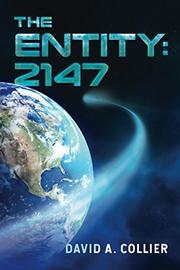 In Collier’s debut sci-fi novel, set in the mid-22nd century, a Kentucky farm family is changed forever when a strange object lands on their property, promising a solution to the urgent problem of climate change.

In 2147, advanced computers and robots do all the labor in the developed world, where many people receive an automatic wage stipend and the average human life span is 92.4 years. But the planet is also beset by disastrous climate change, which has caused oceans to engulf Florida as well as other low-lying territories and nations. Meanwhile, impoverished countries, such as India and Bangladesh, confront famine, flood, and refugees. One day, a softball-sized, glowing orb settles on the family farmstead of the Hickory family in Bourbon County, Kentucky. First police, then scientists and the military arrive to behold the miraculous visitor. After 8-year-old Jillian Hickory touches the orb, she’s not only cured of her cerebral palsy—she also becomes the orb’s voice. Through her, the entity states that humankind is doomed to a slow death due to the rising temperatures but that technology to limit and reverse the damage of high carbon-dioxide levels is available—if we can handle it. Meanwhile, media representatives and messianic-cult pilgrims invade the Hickory homestead; the latter are mostly Greco-Roman pagan Earth-spirit worshipers. Collier embeds a great deal of future forecasting in this straightforward, rather no-frills tale of benign first contact. The author’s narrative voice is instructive but never hectoring or alarmist about climate change, and it remains sure-footed throughout. That said, he often interrupts the flow for short sidebars on future technology, such as human-implanted cellphone devices. In the end, however, he ably achieves a blend of popular science, science fiction, and human-scale characterization, which the late Carl Sagan attempted with mixed results in 1985’s Contact.

A low-key tale of the future that’s somewhat didactic but generous in spirit.

The Old Man and the Sea

(The Old Man and the Sea: Fisherman versus Nature) (The Entity: Humanity versus Climate Change)

Dedicated to those who love this tiny speck of wonder called Earth.

Service Management: The Automation of Services