David Loux is an alumnus of the Iowa Writers' Workshop and a member of the Community of Writers at Squaw Valley. He served as a past board member of California Poets in the Schools. He presently lives in the Mt Rose foothills of the eastern Sierra with his wife, Lynn.

Chateau Laux is his debut novel, scheduled for release on April 6, 2021. Based on a true incident, Chateau Laux is the story of a young Philadelphia entrepreneur who chances upon a French aristocrat living on the edge of the frontier. The year is 1710 and Penn's colony represents hope for some, refuge for others and a more sinister kind of escape for far too many. The entrepreneur falls in love with one of the aristocrat's daughters and builds her a chateau in a misguided attempt to prove himself worthy. In the process, he sets in motion a sequence of events that ends in tragedy.

Chateau Laux stands on its own. That said, it is part of a trilogy that includes two historical novels and a third that is set in the present day.

More book information, including prepublication acclaim, can be found at www.wiregatepress.com. 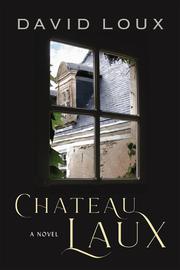 A debut novel about two colonists in America whose lives become entwined during the early years of the 18th century.

Twenty-two-year-old Lawrence Kraymer is tired in body and soul. He owns a successful Philadelphia brewery inherited from his cruel, exacting grandfather, who raised him after the untimely death of his unwed mother. Seeking a sense of inner peace that persistently eludes him, Lawrence hires John, a young Native American, to lead him on a hunting expedition through Pennsylvania’s frontier country. Later, when John heads off to New York, Lawrence chooses to stay behind in the wilderness—but without his guide, he soon finds himself lost. In a move that will change his destiny, he seeks refuge from a storm at a farm owned by Pierre Laux. There, he meets and is captivated by the lovely, 18-year-old Catherine, Pierre’s eldest daughter. As the novel unspools, readers learn that Pierre was born an aristocrat in southern France but arrived in Philadelphia as a destitute, 13-year-old orphan. When Lawrence later decides to build a chateau near Pierre’s farm, it triggers the elder man’s painful memories of life in the Pyrenees and the loss of his mother—the first indications that the novel will take a tragic turn. From the first pages, Loux, a poet and short story author, writes with a grace and a clear love of language that permeates the narrative, as when the story explores the linguistic schisms that divided northern and southern France during Pierre’s childhood. The author includes just enough period detail to bring the era to life without feeling excessive and incorporates intriguing tidbits about French religious conflict in Pierre’s backstory. Although the action in this slow-paced, character-driven tale, which focuses mainly on Pierre, Lawrence, and Pierre’s oldest son, Jean, frequently meanders, there are always signs of approaching conflict from a past that’s not “content to rest in peace.”