David Perlstein is the author of THE BOY WALKER, a novel set in San Francisco involving the estrangement of a father and son, dogs, Down Syndrome, the Angel of Death and stand-up comedy. He also authored SLICK!, a geopolitical satire set in the Persian Gulf—a Kirkus Reviews Top 25 Indie Book of 2012—and SAN CAFÉ, a follow-up set in Central America. David also wrote two non-fiction books: GOD'S OTHERS: NON-ISRAELITES' ENCOUNTERS WITH GOD IN THE HEBREW BIBLE (iUniverse) and SOLO SUCCESS: 101 TIPS FOR BECOMING A $100,000-A-YEAR FREELANCER (Crown Publishers, New York) based on his career as a freelance advertising copywriter and TV/radio commercial producer. He holds a B.A. in English Literature from Alfred University (New York) and an M.A. in English from St. Mary's University (San Antonio). He also is a graduate of the U.S. Army's Infantry Officer Candidate School at Fort Benning, Georgia. David's favorite overseas travel sites include Jerusalem's Western Wall, Petra (Jordan), Pompeii, Venice, Stonehenge, the British Museum, Angkor Wat, the canals of Bangkok, Teotihuacan (Mexico) and the gift shop at the Tokyo Dome, home of Japanese baseball's Tokyo Giants. David lives in San Francisco.

“A funny, affecting novel about fragmented lives that slip the leash.”
– Kirkus Reviews 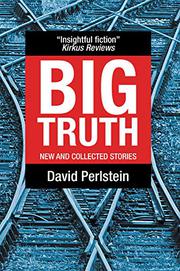 The characters in Perlstein’s (The Odd Plight of Adonis Licht, 2017, etc.) short story collection endure tragedy and betrayal in a generally gloomy world.

The book opens with “Beautiful!” in which Californian and former astronaut Hunter celebrates his 80th birthday. Since his celestial voyage long ago, he’s been depressed, as humanity seems insignificant compared to the vast galaxies. Now he hopes to make a difference in the world with a charitable act, but it may not be enough. Numerous other tales, most of which are also set in the Golden State, are likewise grim. Some characters merely recall a sordid past; in “Two Suitcases by the Side of the Road,” for instance, the narrator, a writer, invents a fictional backstory for the owner of the titular, abandoned suitcases, which evoke memories of his own failed relationships. Other stories involve people deceiving friends or lovers. In the title tale, pals Jeffrey Hyer, Gary White, Arnie, and Steve have a road trip reunion and discover that their shared history is filled with disloyalty. In the standout “Really, Do We Have to Know Everything?” Scott, a stay-at-home dad, puts a tracking app on his children’s phones as a precautionary measure in case of kidnapping—but then he considers using it to investigate his wife’s suspected infidelity. Perlstein occasionally links his stories together with allusions to earlier events as well as recurring characters, including all four friends in “Big Truth”; the most memorable of these is White, a successful, pompous painter/sculptor who often refers to himself in the third person. Readers will breeze through Perlstein’s relatively short tales, some of which are only a few pages long. Despite the collection’s somber characters and plot turns, it’s more engaging than it is dismal, as it offers fables with clearly discernible morals. Californians Liz and Mel of “Taj Mahal” can’t escape constant reminders of their deceased son even when they’re in India; it’s a sad but profound revelation that makes it clear that mourning requires time and patience. The author also incorporates myriad biblical references, most notably a contemporary update on the story of Job (“The Satan and God Go Double or Nothing”) and an Adam and Eve parody (“The First Fashionistas”). The latter is indicative of the author’s sense of humor, which is even present in stories that ultimately turn dark—such as “Twins Under the Skin,” which begins with an employee and a manager at a 24-hour Biggie-Mart debating the definition of the term “Friday night” during a Thursday overnight shift. Perlstein also mutes the few instances of violence; a father in “Prescribed Burns” searches for an outlet for his son’s aggressive tendencies, and in “Medium-Boiled,” a man tries to subdue his “dark side” after his girlfriend leaves him. The author consistently offers meticulous, indelible descriptive passages. In “Max,” for example, the young narrator aptly illustrates the carefree nature of childhood: “When you’re ten, the world of adults is as complex as a cobweb and just as weightless.”

Sometimes dour but insightful fiction that will spark readers’ emotions. 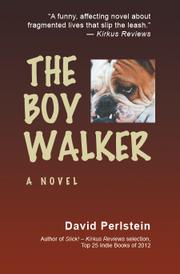 In Perlstein’s (Slick!, 2011) winsome fable, a protective dog and the therapeutic effects of stand-up comedy help heal a wounded family.

Abbie Greenbaum is a 25-year-old slacker in San Francisco who coasts through a life centered on desultory dog-walking gigs and a garage band. He still lives with his dad, Morty, an American studies professor who specializes in deep ruminations on TV comedy. Morty’s English bulldog, Brutus, who’s chief among Abbie’s canine charges, narrates their story with a stately aplomb befitting his advanced age and arthritic hips. Brutus so identifies with his masters that he considers himself a fellow Jew; in his own mind, he’s adopted the name Baruch and presides benignly over Morty’s frequent observances of Jewish memorial rituals. There’s a lot for Morty to mourn, as his daughter, Sara, and wife, Lenore, died years ago—a tragedy that overshadows his strained relationship with Abbie. Another girl named Sarah, a motor-mouthed 10-year-old with Down syndrome, bounces into Abbie’s dog-walking routine along with her mother, Rivka, a half-Jewish, half-Chinese professional stand-up comic. Over the course of the story, Abbie gets embroiled in a friend’s half-baked drug-dealing scheme, Morty comes down with lung cancer, and both become infatuated with Rivka, who prods Morty through her stand-up comedy class. Perlstein’s novel has some twee conceits that might have overwhelmed it, particularly the plummy, stentorian narrative voice of Brutus, who sounds like Henry James scoping out a nightclub (“Understanding my role as Abbie’s wingman—and aware of the attraction that an English Bulldog of my stature maintains for women of all ages—I gazed instead into the young Latina’s eyes as might Rudolph Valentino in the era of silent films”). Fortunately, the author’s gift for sharp, empathetic human characterizations rescues the proceedings. He steeps the story in well-observed renditions of West Coast Jewish culture, from homey dinner routines to the theory and practice of stand-up comedy, in which kvetching is the wellspring of artistic revelation. Perlstein offsets the shtick with psychological depth and nuance, keeping it charming throughout.

A funny, affecting novel about fragmented lives that slip the leash. 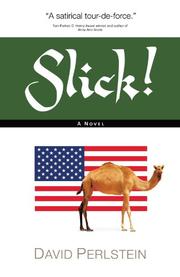 As a deadlocked election grips the fictional sultanate of Moq’tar, no issue is safe from Perlstein’s (God’s Others, 2010, etc.) wit as he lampoons politics in the Gulf.

Bobby Gatling, a retired U.S. soldier now employed by a private security firm, is on assignment in Moq’tar. While Bobby’s been training security forces, the aging sultan has allowed his favorite son, Yusuf, to run the country. Western-educated with an MBA from Berkeley, Yusuf has been hard at work, in the capitalist fashion, transforming Moq’tar into “Moq’tar, Inc.” And his sister, the alluring Zoraya, has been with him every step of the way. But everything gets complicated quickly when it turns out that the succession isn’t as certain as Yusuf (and America) thought. Between a drunken U.S. ambassador, a cultural affairs officer with a penchant for cinema, and Yusuf’s playboy-turned-traditionalist older brother, Bobby has his work cut out for him. Stuck in the middle, he’s forced to balance his duties, his loyalties and his conscience as he navigates the dangers of a Middle-Eastern election rife with double-dealing and assassination attempts. The setting works brilliantly for Perlstein to show how ridiculously volatile the region can be, as he takes well-aimed shots at capitalism gone too far, gulf politics, forced democracy and anti-Semitism (to name just a few). It’s satire at its finest—laughing until the sobering moment of realization that the events in Moq’tar aren’t as fictional as you’d hope. To his credit, Perlstein never crosses the line into offensiveness, despite the numerous hot topics and cultures in his sights. And although he tends to dump characterization on the reader, that’s hardly a bother since each one is compelling. Best of all, the novel isn’t written just for scholars of the region; the plot is packed full of car chases and plot twists that keep the tension high and the pace fast. Those looking for subtle humor will find plenty, but those interested in action and intrigue alone won’t be disappointed either.

What else is there to say? It’s slick. 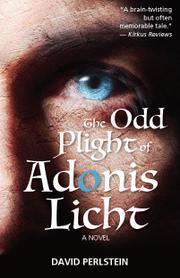 THE ODD PLIGHT OF ADONIS LICHT

BY David Perlstein • POSTED ON

In Perlstein’s (Flight of the Spumonis, 2015, etc.) latest novel, a frumpy, overwrought, 30-something art curator is transformed, as if by magic, into the handsome man that he always wanted to be.

The first few chapters of this book offer a glimpse into the mind of the titular Adonis, who’s supremely unhappy with his life. He mopes in his tiny studio apartment, where his depression and anxiety blur fantasy and reality. One lonely night, for example, he imagines that the pigeons on his windowsill are mocking him. But is he imagining this? The text leaves readers wondering. When Adonis awakens one day as a taller, leaner, more masculine version of himself—with no hint as to how the change happened—he suddenly gets positive attention from women, co-workers, and even strangers. His new plight is that he now feels as disconnected from his physical self as he does from people around him, except for one homeless woman named Anna. As an art-forgery scandal threatens to overtake the museum where he works, Adonis fears that tragedy has befallen Anna, and his world implodes. Readers will be left with some unanswered questions after the story ends. Indeed, they’ll face an odd plight of their own as they try to untangle this unusual novel that’s part fantasy, part parable. Perlstein’s quirky prose has Adonis seeing the world through a series of elaborate similes. His mother and brother trample obstacles in life, for instance, “like bull elephants in heat,” and a woman emerges from a car “like an old-time striptease dancer popping up out of a giant birthday cake.” The first few chapters of the book so thoroughly immerse readers in Adonis’ pain and linguistic oddities, in fact, that they’re discomforting to read. There are occasional typographical errors in the text, however, and the frequent repetition of characters’ full names, particularly during a scene at an office staff meeting, may also pull readers out of the story.

A brain-twisting but often memorable tale.