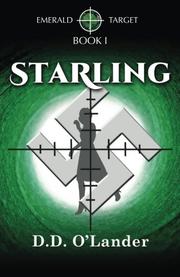 Ellie MacCallister Greer is a Scottish double agent, working in Germany for MI6; her German code name is “Starling.” In this book’s prologue, set in 1940, her husband, Capt. Brandt Gundestein—also a double agent—is found out by the Nazis, tortured, and killed by the sadistic Lt. Col. Joachim von Zeitz. The pregnant Ellie goes on the run, heading for Canada, but a German U-boat torpedoes her uncle’s decrepit freighter; Lt. Karney Liam “Irish” Rork, skipper of the cutter Zealous, heroically rescues her, but soon afterward, she suffers a miscarriage. Numerous adventures with lots of derring-do follow, mostly in Newfoundland and Greenland, where the Nazis may lurk in a covert submarine base. Ellie and Karney slowly fall in love as they work together against the Nazis. Readers will constantly find themselves wondering whether a particular character is a friend or foe—a spy, or perhaps an assassin. Debut author O’Lander is an able writer, and her command of military lingo and technical details is truly awe-inspiring. Aficionados of WWII, and especially those of a naval bent, will be amply rewarded. The author keeps the pot well-stirred throughout; events come at a brisk pace and the short chapters often end in cliffhangers. The author’s love of all things Celtic is also clear, if sometimes a bit distracting; Rork, for example, is shown to not only be adept with Irish proverbs and adages—he can recite them in the original Gaelic, to boot. Also, Ellie speaks with a Scottish accent that can be wearing when spelled out in text, and a few nautical metaphors, such as Ellie’s concern for “the hatchway to Karney’s heart,” may beg some readers’ indulgence.

An often absorbing thriller that will likely entertain readers for hours.