Debbie Hampton recovered from depression and a suicide attempt to became a popular mental health blogger. Her memoir, Sex, Suicide and Serotonin: How These Things Almost Killed and Healed Me tells how after taking care of her brother as he died of AIDs, the explosion of her marriage to her high school sweetheart in a Divorce Court-ugly split, and being flat-out disappointed and disgusted with life, she swallowed handful after handful of pills. The drugs went all the way through her system wreaking destruction before she was found.

After a week in a coma, Debbie woke up to a very different world with a serious brain injury. Her ex-husband sued her for custody of their two sons, won, and promptly moved out of state with them. And she thought things were bad before? This intimately honest, witty, and wise book is the story of how she got to and climbed back from that rock bottom place to not only survive but thrive.

Debbie's first book, Beat Depression And Anxiety By Changing Your Brain, explains that the key to overcoming depression and anxiety and to stop living a fear-based existence is in our heads. Literally. By taking control of our minds and thoughts and adopting brain-healthy habits, every one of us can harness the superpower we were born with, neuroplasticity, to optimize operation, reverse negative thinking patterns, and alter the chemical balance and physical form and function of our brains.

Debbie's website and Facebook page have attracted a vast, raving fan base, and she writes for The Huffington Post, MindBodyGreen, Healthline and other well-known websites. She lives in Greensboro, North Carolina, with her six cats and is a hot yogaholic and an eternally optimistic gardener.

“Hampton remains steadfast in creating a memoir that shows both the problem and the solution.”
– Kirkus Reviews 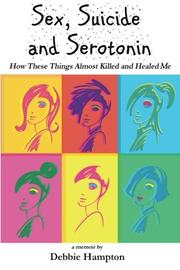 A divorced mother attempts suicide and suffers a brain injury in this debut book about trauma and recovery.

In June 2007, Hampton woke up in a hospital, not completely sure of why she was there. In the weeks that followed, she learned that a suicide attempt had left her with a “global, acquired brain injury.” Speech was difficult, and her sense of time became skewed. When she overheard her father planning what clothes to pick up from her house, Hampton asked, “I have a house?” She goes on to describe the circumstances that led to the suicide attempt: a breakup with her boyfriend, a terrible hangover, and a messy divorce. Stealing pills from a friend’s house, Hampton attempted to overdose on medication. Her 10-year-old son discovered her passed out on the kitchen floor when he came home from school. While struggling to recover from her brain injury, Hampton lost custody of her two sons to their father. A strict visitation schedule inspired her to get better. Hampton often dips into her back story: other suicide attempts; the death of her beloved brother Chris; her abusive ex-husband. All of these traumas began to heal when Hampton started to pursue alternative medicine, including acupuncture, massage, and something called “neurofeedback.” Eventually she became well enough to make peace with her past and her present. Hampton is candid in her storytelling, offering an unsentimental look at her own worst moments. While the chronology of the forthright memoir jumps back and forth, the characters recur in a fashion that’s easy to follow as Hampton reveals more and more of her past. She folds in quotes and titles from various authors’ inspirational books, from Byron Katie to Pema Chodron, that work to assure readers that this is ultimately a memoir of healing. There’s a tendency to explain what happened rather than to let the story unfold, but Hampton remains steadfast in creating a memoir that shows both the problem and the solution. The ending could stand more action and less exposition, but a penultimate scene reveals Hampton vacationing in Hawaii with her brother Ken, buoying the tale with much needed hope.

This earnest memoir about healing sometimes meanders but eventually finds its voice.

The Brain That Changes Itself - Norman Doidge

“I’m a free spirit who never had the balls to be free.” Cheryl Strayed, Wild: From Lost to Found on the Pacific Crest Trail

I can still do a split! (Although it doesn't come in handy very often these days.)

Hot yoga - The hotter, the better.

Beat Depression and Anxiety by Changing Your Brain

The key to overcoming depression and anxiety and stop living a fear-based existence is in your head. Literally. By taking control of your mind and thoughts and adopting brain-healthy habits, you can harness the superpower we were all born with, neuroplasticity - your brain's ability to change itself, optimize operation, reverse negative thinking patterns, and actually alter its chemical balance and physical form and function, so that happy and healthy become the default. Change your brain. Change your life. I did it. But only after a decade of depression ending in a suicide attempt that left me with a seriously compromised brain. In healing my brain, I healed my life. You can do it too. I'll tell you in plain English backed by science how you can improve your brain and life through simple practices: - diet and exercise - mindfulness and meditation - responding rather than reacting - gratitude and forgiveness - making friends with fear - visualization, thought reframing, and more. "This book is a wonderful source of insight and understanding from someone who knows firsthand the transformative powers of the brain's plasticity." Dr. Micheal Merzenich, world authority on brain plasticity and author of Soft-Wired: How The New Science Of Brain Plasticity Can Change Your Life "Debbie Hampton gives a behind the scenes look at the workings of the mind and brain and draws from some of the leading scientists and teachers of our time. But more than that, she weaves her own powerful story of recovery from brain injury into each chapter. She provides a refreshing and personal look into mindfulness, neuroplasticity and recovery from someone who has travelled the journey. A remarkable book that is beautifully written, compassionate and wise." Dr. Sara McKay, neuroscientist, writer and founder of Your Brain Health
Published: March 2, 2015
ISBN: 1514112000