Deborah Nedelman, PhD, MFA worked as a clinical psychologist for over 30 years in Everett, Washington. She is co-author of 2 non-fiction books: A Guide for Beginning Psychotherapists (Cambridge Press) and Still Sexy After All These Years (Perigee/Penguin). Her short fiction appears in The Concho River Review, Contemporary World Literature, Persimmon Tree, Adelaide Literary Award Anthology, The Masters Review, and Literary Orphans among others. Her first novel, What We Take for Truth, published by Adelaide Press in June 2019, is a finalist for the Sarton Women’s Fiction Award. Deborah is a manuscript coach and leads writing workshops. Kirkus Reviews gave What We Take for Truth a starred review and named it to Kirkus Reviews’ Best Books of 2019.

Deborah's creation of the fictional logging town of Prosperity, Washington, where this novel takes place is based on many small towns throughout the state where an entire community is dependent on single mill. As a psychologist in the 1980's and '90's, Dr. Nedelman witnessed the personal tragedies of many families in these communities who were impacted by the environmental regulations put in place to protect the spotted owl and the old growth forests. The women whose lives were torn apart during this tumultuous time have rarely been given a voice. Still a fervent environmentalist herself, Deborah wrote What We Take for Truth ito share some of these complex and agonizing stories.

“An impressive environmental tale with an engaging heroine from a talented new novelist.”
– Kirkus Reviews 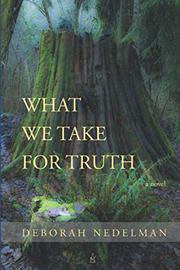 WHAT WE TAKE FOR TRUTH

A novel spins a story of hard choices and secrets set in beautiful but ironically named Prosperity, Washington, in 1991.

Although the logging town of Prosperity at one time more than lived up to its name, that era is fading fast thanks to a new environmental awareness. It is tree huggers against loggers, protecting the forest habitat versus feeding one’s family. Caught in the middle of this is Grace “Parrot” Tillman, whose mother died when she was a child. Her father died some years later, so the only family she has left is Aunt Jane, a bitter woman with no love for Prosperity or its loggers. Grace feels a strong pull to flee Prosperity, but fate has a way of intervening. Mill owner Jackson Dyer dies and leaves her an old cabin in his will. His wife tells Grace: “He wanted you to have your own place. Some place in Prosperity you could always call home and come back to if you ever left.” Later comes a bombshell: a huge secret involving Grace and her family that somehow the whole town managed to keep from her. Grace is devastated, then furious. The rest of the tale amounts to slow closure. While this is Nedelman’s (co-author: Still Sexy After All These Years?, 2006, etc.) first novel, she has two nonfiction books and a raft of short stories to her credit. She also has a Ph.D. in clinical psychology, and her practice inspired much of her intriguing new work. What could have been a straightforward polemic about tree huggers and loggers quickly becomes much more subtle and nuanced than that. It is a late coming-of-age tale about Grace, a wonderfully drawn character, a young woman who doesn’t want to take sides, and the author lets her skirt that argument. Having taken over Aunt Jane’s cafe, the Hoot Owl—the endangered bird at the crux of this ecological battle—Grace just wants to survive and maybe bring the town together. Nedelman’s writing is adept with some surprising descriptions (“The town glowed like a bearded hermit stepping from his annual bath”). The tale’s only villain is a man named Nathan Roberge, who’s connected to Grace’s family; the other characters are desperate people but not evil. A key question hovers over the engrossing story: When push comes to shove, will everyone shove together?

An impressive environmental tale with an engaging heroine from a talented new novelist.

WHAT WE TAKE FOR TRUTH: Kirkus Star

WHAT WE TAKE FOR TRUTH: Sarton Women's Book Award--finalist, 2019

A Guide for Beginning Psychotherapists

Still Sexy After All These Years?

The 9 Unspoken Truths About Women's Desire Beyond 50