Deborah Serani is the author of the award-winning nonfiction books, "Living with Depression," "Depression and Your Child: A Guide for Parents and Caregivers" and "Depression in Later Life" published by Rowman & Littlefield. Her debut psychological suspense thriller, "The Ninth Session," by TouchPoint Press was just released. And her first in a series of children's picture books, "Sometimes When I'm Sad," by Free Spirit Publishing arrives in 2020.

Dr. Deborah Serani is a senior professor at Adelphi University and a go-to media expert. She has worked as a technical advisor for the NBC television show Law & Order: Special Victims Unit. The recurring character, Judge D. Serani, was named after her. 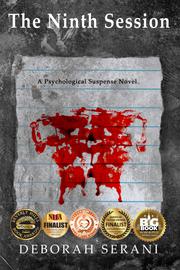 In this thriller, a tenacious New York psychologist tries to help a patient who may be a murderer.

Dr. Alicia Reese’s initial encounter with Luke Ferro is unorthodox, as he has a panic attack before their first session begins. But that night, she spots a black sedan near her house before it drives away, and she worries Luke followed her home. Despite assuring herself that it wasn’t her new patient (he drives an entirely different car), Alicia can’t help but associate a feeling of dread with Luke. In a later session, Luke claims he’s killed someone—an individual from another state who’s currently missing. Alicia looks into the supposed murder as furtively as possible, so as not to breach confidentiality. Regardless, she’s determined to remain Luke’s doctor and provide whatever psychological assistance he’ll need. But an unexpected event changes everything and makes Alicia question her choices. Luckily, she has the support of her supervisor, Dr. Susan Prader, and her older sister, Nicole Cappas, who is deaf. But delving into Luke’s background is a task Alicia handles on her own, igniting her fears that he’s a patient she simply can’t help. Author/psychologist Serani’s (Depression in Later Life, 2017, etc.) first foray into fiction is a taut, suspenseful tale. Periodic chapter headers number the sessions, leaving readers in anticipation of the one that the title playfully teases. While some readers will guess a plot turn, it still effectively shifts the story in a new direction. Moreover, it precipitates several additional twists and a relentlessly tense final act. As a protagonist, Alicia is professional (her notes trail each session) and sympathetic. She, for example, lost both parents and her husband, Ryan, in a relatively short time and is a child of deaf adults, or coda, who frequently signs with Nicole. Alicia is also devoted to psychology, and she won’t easily give up on Luke, notwithstanding his potential psychopathy.

A smartly written, edgy story with a keen, tireless heroine.

Depression and Your Child: A Guide for Parents and Caregivers: IPPY Silver Medal Book of the Year Award, 2014

Depression and Your Child: A Guide for Parents and Caregivers: Foreword Indies Gold Medal Book of the Year Award, 2013

Depression and Your Child: A Guide for Parents and Caregivers

Seeing your child suffer in any way is a harrowing experience for any parent. Mental illness in children can be particularly draining due to the mystery surrounding it, and the issue of diagnosis at such a tender age. Depression and Your Child gives parents and caregivers a uniquely textured understanding of pediatric depression, its causes, its symptoms, and its treatments. Serani weaves her own personal experiences of being a depressed child along with her clinical experiences as a psychologist treating depressed children.
Published: Jan. 22, 2015
ISBN: 9781442244467

For sufferers and their families and caregivers, this go-to guide introduces readers to depression among the aging and elderly. It looks at both sufferers who’ve been diagnosed in their younger years as well as those with a new diagnosis, and reviews the symptoms, the diagnostic process, treatment options including alternative and holistic approaches, and long term care for those experiencing mild, moderate, or severe depression.
Published: Dec. 28, 2017
ISBN: 9781538110430

In Living with Depression, Serani outlines the various forms of depression, describes the different treatments, and outlines methods for living with depression and getting the help you or a loved one needs. Tips on how to choose a good therapist, negotiate the labyrinth of healthcare, and minimize stigma are addressed, as is learning how to use biology and biography as tools of empowerment. Listings of national and global resources make this a ready resource for everything you need to know about depression.
Published: Oct. 16, 2012
ISBN: 9781442224018