Dennis Hunter has been teaching meditation, Buddhism, and yoga philosophy since 2002. He lived for two years as a Buddhist monk at Pema Chödrön’s monastery in Nova Scotia.

His second book, The Four Reminders: A Simple Buddhist Guide to Living and Dying Without Regret, was acclaimed by Kirkus Reviews as, "a smart, eminently readable Buddhist guide to achieving an inner awakening," and endorsed by Yogarupa Rod Stryker, Ethan Nichtern, Kino MacGregor, Koshin Paley Ellison, and other major teachers and authors in the worlds of Buddhism and Yoga.

His first book, published in 2014, was You Are Buddha: A Guide to Becoming What You Are. His blog One Human Journey has been active for nearly a decade, with hundreds of articles and resources. He is a contributing writer for HuffPost. His guided audio meditations can be found on the Insight Timer meditation app.

Dennis lives in Miami Beach with his husband, the yoga teacher Adrian Molina; they co-founded the Warrior Flow school of yoga, and together they lead classes, workshops, and international yoga and meditation retreats. 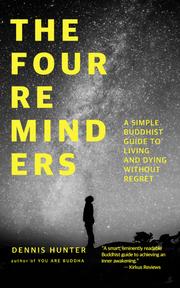 A manual offers advice on anxiety-free living, filtered through a Buddhist perspective.

Drawing broadly on classical Buddhist tenets, the latest book from Hunter (You Are Buddha, 2014) seeks to encourage readers to breathe deeply and take stock of their lives. It does this by distilling traditional Tibetan Buddhist thinking into four “reminders”: first, that every person is a “spark of divine consciousness”; second, that an individual is mortal and will soon die; third, that humans are the architects of their own realities; and fourth, that a sense of fulfillment ultimately comes only from within. In underscoring these reminders by advocating that his readers empty their minds of negative emotions, Hunter is completely unhindered by the fact that one of his dictums is controversial (are people really the sparks of some larger “divine consciousness”?) and another is wrong (humans are not the architects of their own realities; huge amounts are determined by elements entirely outside of their control). He concentrates his eloquence and enthusiasm throughout this book—which is engaging and knowledgeable enough to serve as a general introduction to the modern Western versions of Tibetan Buddhism—on two of his four reminders: the belief that all people are mortal and that their attitudes toward the world are largely their own to forge. “The human body needs constant protection and support in order to avoid being snuffed out by a hostile world,” Hunter writes. But the human mind is shaped internally as well, and those factors can be vital in determining the course of a life. “The reason karma is so infallible,” Hunter insightfully reminds his readers, “is because there’s no way to escape or hide from your own mind.” Rather, a healthy emphasis should be placed on improving karma by enhancing the mind, and this lucid book is full of hard-won and well-phrased pointers on how even the most stressed-out readers can start to bring that about in their own lives.

A smart, eminently readable Buddhist guide to achieving an inner awakening, an inward victory that “looks like surrender.”

Intuition: Talk Based on First Chapter of "You Are Buddha"

You Are Buddha: A Guide to Becoming What You Are

We are all looking for greater meaning and wisdom in our lives. The problem is that we search for these things outside ourselves. The most profound teachings of the Buddha say that the wisdom we search for does not come from outside. It is already within us; it is our very nature. The spiritual path is simply a way of helping us uncover and manifest the wisdom we already have. Filled with personal stories, guided meditations, and more, You Are Buddha offers a practical guide to learning meditation, working with thoughts and emotions, becoming more deeply embodied, understanding the nature of mind, developing ethical conduct, and becoming an authentically mature, awakened human being. Available in paperback, ebook and audiobook format (narrated by the author).
ISBN: ISBN-10: 1499686196 ||| ISBN-1