Before penning fiction, Dennis Ricci enjoyed a 37-year career as a marketing/advertising strategist, management consultant, copywriter, and instructional designer. He served clients in the automotive, financial services, information technology, and services industries and worked for some of the most highly regarded companies in their fields, including Chiat/Day, J.D. Power and Associates, and IBM.

Now, in addition to writing novels, he mentors aspiring writers, conducts writing workshops, and runs a non-profit organization with his wife, Jill, through which they and a team of dedicated servants minister to the sick.

Dennis' interests beyond writing include reading other authors' great fiction, travel, entertaining, and building his culinary chops in their home kitchen. He’s also a passionate hockey fan and shares his love of the game with his three grown children at Los Angeles Kings games, especially when they play his hometown Detroit Red Wings.

Dennis and his wife live in suburban Los Angeles.

“Ricci handles the admittedly front-loaded momentum of his narrative with the skill of a practiced professional; he has the patience and sound ear to create his characters—particularly Lamport—as much from dialogue and quick, telegraphic thoughts as from overt scene-setting...Ricci delivers that rare bird, an action novel that should appeal equally to Christian and non-Christian readers. This is an extremely promising and muscular debut.”
– Kirkus Reviews 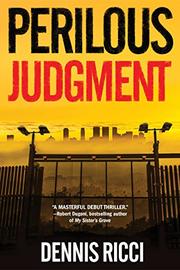 A heroic federal judge will stop at nothing to save the life of his son.

Ricci’s first novel stars U.S. District Judge Edward Lamport, a stern and upright magistrate with a “demonstrated ability to separate his personal feelings from his professional duty,” a trait that he doesn’t necessarily like. He’s overseen several controversial cases in his California jurisdiction, and he’s no stranger to facing threats of violence arising from his rulings. As the tale opens, one such threat has the U.S. marshals worried enough to issue Lamport body armor and prep him in firearms. So the judge is already on high alert when he gets a panicked text message from Alana Walsh, his first love, whom he knew and left before he married his wife, Jacqui. Alana calls him from Mexico to tell him their son, Carlos, is in trouble: while working for a large Mexican bank, he’d uncovered evidence hinting that the institution was involved in laundering money for drug cartels. Now he believes his life is in danger, and he and his mother are imploring Lamport to help Carlos immigrate to the United States. Not only do cartel enforcers want him dead, but immigration itself is an explosive topic in Lamport’s California as well. A controversial new proposition is seen by some as “backhanded oppression” of the state’s large population of illegal immigrants. The judge naturally attempts to call in favors from political friends, but when his efforts gain curiously little traction, it begins to look like the plot Carlos uncovered goes even deeper than it initially seemed. Ricci handles the admittedly front-loaded momentum of his narrative with the skill of a practiced professional; he has the patience and sound ear to create his characters—particularly Lamport—as much from dialogue and quick, telegraphic thoughts as from overt scene-setting. The author’s overlay of Christian elements onto the enormously readable story is subtly and believably done. (When Alana first contacts Lamport, she tells him that Carlos said “he had a plan and he trusted God to protect him.”) Ricci delivers that rare bird, an action novel that should appeal equally to Christian and non-Christian readers. This is an extremely promising and muscular debut.

A fast-paced and thought-provoking legal thriller built around the hot-button issue of immigration.

In retrospect, it would seem an odd way to start a war.

Helping people discover what makes them come alive and live it.