Denny Goetz, for most of his life a resident of Manhattan, considers his appreciation of the foibles and idiosyncracies of his fellow citizens to be a trait that helped him to thrive in this multi-cultural city. While an admirer of eccentrics and rebels, he enjoys skewing in a comic spirit the hypocrites and self-justifiers reflecting the darker aspects of society. He has written a children's play, several screen-plays and is working on a memoir of his mother. This is his first published novel. 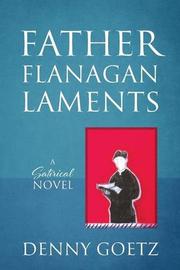 In Goetz’s debut novel, Father Emery Flanagan, though a venerable and thoughtful priest, wrestles agonizingly with the fleshly temptations and sin surrounding his ministry.

The Catholic Church and its sex scandals is hardly an original topic for barbs, but Goetz’s satirical novel—comprising interior monologues, letters, diary entries, and direct entreaties to God by Father Flanagan—is a funny, fresh take on organized religion. An ecumenical cleric with an unflagging faith in his Lord and church and a fierce, almost neurotic drive to justify/forgive/overlook the many transgressions of his flock, Flanagan does, initially, come across as a good man at heart—even as he finds himself embarrassingly afflicted with the lustful urges that manifest themselves in the forms of chronic irritable bowel syndrome and perpetual erections. Although oddly progressive in his pretzel-shaped intellectual rationalizations for others, Flanagan is positively medieval in his own private, purgative rituals. He sleeps on a straw mattress, flagellates himself, and lugs around a large, custom-carved wooden cross (sometimes he delegates the task to his senile sexton). Plot twists and turns are often hard to discern through the filter of Flanagan’s religious rantings and mounting delusions. He loses his prized altar boy to maturity and marriage, and a poor substitute (dubbed “the goat”) takes on satanic proportions. Distractions undermine his attempt to lead a children’s procession for Christ in reaction to the appearance of a brothel in town. Finally, the unstable hero lands in the midst of an incredibly foul deal between a gangster-ish local millionaire and a bishop that ensures more cash for the diocese. Goetz’s prose and characters bring to mind such caustic novelists as Joseph Heller, Evelyn Waugh, and John Kennedy Toole, not to mention the Christopher Durang stage play Sister Mary Ignatius Explains It All For You, and, God knows, that is a strong congregation.

Don’t expect a Legion of Decency recommendation for this snide condemnation of Catholic corruption from the ecstatic point of view of a heroically flawed protagonist.