Derek Cressman is an olive grower and award-winning author who has lived in Sacramento since 2000. He has worked professionally to reduce big money in politics in 1995 with nonpartisan organizations such as Common Cause and the Public Interest Research Group. He's currently enrolled in Stanford's Online Writing Certificate Program in Novel Writing.

In 2014, Derek Cressman ran for California secretary of state. Though he wasn’t elected, the legislature responded to his campaign, and the efforts of others, by referring a question to the ballot instructing Congress to overturn the Citizens United ruling—the central plank of Derek’s campaign platform.

Cressman has served as a credentialed elections observer in Somalia, El Salvador, and Florida.

When he’s not working to improve our democracy, Derek enjoys spending time with his wife and two daughters. He credits his time running marathons and mountaineering with building his fortitude to tackle obstacles of social change. He is an avid woodworker and picks at the banjo when he needs a break. Derek grew up in Colorado Springs and graduated with honors from Williams College in 1990 with a degree in political science. 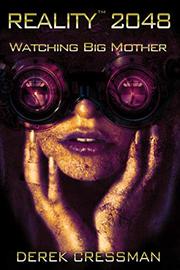 In a setting similar to Orwell’s Nineteen Eighty-Four, corporations suppress independent thought through a constant stream of media content.

In this novel, the year is 2048. The population of the international superstate known as Globalia is divided into the elite Establishment and the pedestrian Vues (a name derived from their status as viewers). Citizens experience the world through MyScreens or MyndScreens: devices that, depending on income, are worn as helmets or implanted directly into the brain. An individual’s activity is monitored by the SpeidrWeb™, and anomalies are retired to entertainment homes where content is streamed to them without pause. Vera works in the Department of Information, researching statistics for public announcements. Bored by the ceaseless barrage of infotainment and annoyed by her co-workers’ fixation with the reality TV series Big Mother Gets Real, she uses meditation to achieve a heightened awareness of the physical world. She becomes increasingly disillusioned with her work, realizing that while factually correct, the information broadcasted to the public is usually misleading. Her questioning soon leads her to other rebels, including a charming screenwriter named Chase, with whom Vera becomes romantically involved, and a mysterious legal expert whom she suspects is part of the legendary resistance group the Luddyte Sisterhood. Cressman (The Recall’s Broken Promise, 2007, etc.) draws heavily from the format of Nineteen Eighty-Four, complete with an internal manifesto explaining the history of the Globalian regime. In addition to addressing overstimulation and corporate control, he illustrates the future of social media, relationships, economics, agriculture, warfare, and the devolution of speech into a collection of emojicons. The world he creates is well developed, filled with clever commentary and leavened by satirical situations. But the execution suffers from occasional heavy-handedness. For instance, Vera’s observation that “No infotain firm, no avatar creator, not a single living person has yet created a sound as authentic as the laugh of a child” feels more sentimental than substantive. Although the plot will be very predictable to anyone familiar with Orwell’s writing, the conclusion still manages to deliver a powerful emotional wallop. This modern tribute brings a sense of relevance and urgency to a dystopian classic.

A potent and sobering wake-up call.

When Money Talks -- The High Price of "Free" Speech and the Selling of Democracy: Honorable Mention in Foreward INDIES Book of the Year Awards , 2016

End Court Ordered Corruption -- US News, 2016 BillMoyers.com, 2016 We can save U.S. democracy — but first we need to think bigger, reformer and author Derek Cressman tells Salon, 2016

Fed up with business as usual, Californians recalled Governor Gray Davis in 2003 and replaced him with a celebrity who pledged to clean up government. The Recall's Broken Promise details how Arnold Schwarzenegger then shattered political fundraising records, attacked campaign finance restrictions, blurred ethical boundaries, and how politicians of both parties have killed needed reforms.

Special-interest money is destroying our democratic process. But now that the Citizens United decision has thrown out campaign spending limits as abridgments of free speech, Americans want to know what they can do about it. Derek Cressman gives us the tools, both intellectual and tactical, to fight back. There’s nothing inherently unconstitutional in limiting the amount of speech, Cressman insists. We do it all the time—for example, cities control when and where demonstrations can take place or how long people can speak at council meetings. Moreover, he argues that while you choose to patronize Fox News, MSNBC, the New York Times, or the Wall Street Journal, political advertising is forced upon you. It’s not really free speech at all—it’s paid speech. It’s not at all what the Founders had in mind when they wrote the First Amendment. Cressman examines how courts have foiled attempts to limit campaign spending, details what a constitutional amendment limiting paid speech should say, and reveals an overlooked political tool concerned citizens can use to help gain the amendment’s passage. Seven times before in our history we have approved constitutional amendments to overturn wrongheaded rulings by the Supreme Court—there’s no reason we can’t do it again.
Published: Jan. 11, 2016
ISBN: 978-1626565760