Derek was born in rural Western Australia, growing up mostly in rural South Australia between three family ventures to England. His own restlessness as an adult prompted several moves around both Australia and England, as well as working in fields as diverse as retail, disability services, voluntary sector services, hospitality, furniture removals and energy healing.

A briefer than intended move to New Zealand to complete the final phase of writing this, his first novel, became an extended visit to Singapore and another return to Australia. He presently resides in Hobart, Tasmania, where he is now working on the second of nine planned volumes focusing on the world of Kiyron.

“A sci-fi saga that asks a lot of its readers, but the payoff is a highly nuanced sci-fi experience.”
– Kirkus Reviews 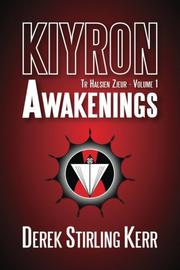 Debut author Kerr offers an epic sci-fi novel that chronicles the history of a distant planet over some six millennia.

Lieoptay-Noot was an “Elder-Teacher” who had insights that “no other seer from any other time could match.” His writings, known as the “Three Augured Climacterics,” steer the grand tale that follows. In the First Climacteric, readers meets Bisel and Padran Penriebës, twins attending Sjaarkrom Institute’s Academy, where they tend to excel when they’re placed in proximity to each other. Although Bis and Pad seem to be the best of the best, questions linger concerning their capabilities, which seem to decline when they’re separated. Add into the equation Bis’ troubled dreams and Padran’s doubts about their lot in life (“I refuse to believe we are just unconscious or unwilling participants in some story, some play,” he says), and the brightness of their future seems uncertain. The Second Climacteric begins with a figure named Iyrës embarking on a journey away from home. His stated goal is to reach the Daumkwaa region in Sabaysjoa, and it’s almost immediately a difficult trek. As he admits to another character, he’ll soon need the help of a gifted healer if he’s to ever reach his destination. In the Third Climacteric, Thesik Zlaifë is on her way home as she ponders some heavy questions, such as “Why are my days and nights an ever-expanding galaxy of questions within a universe of unresponsive emptiness?” Where will such questioning lead her? The book interweaves the three Climacterics with the story of Lieoptay-Noot himself, creating a work that’s extensive and complex; indeed, any plot summary merely reveals the tip of a dense iceberg. Taken as a whole, the book even makes epics such as Frank Herbert’s Dune (1965) seem like light beach reads, and to understand all of the many components and emotions at play, readers will need patience. This can be difficult at times due to the prolific amount of characters and motivations as well as the author’s penchant for extraneous details—particularly during culinary descriptions, as when one character engages in “chewing interspersed with musing sounds and gasps of satisfaction.” Still, even when the book makes sure to point out that some “trevik juice” is freshly squeezed, it maintains a unique voice throughout. The characters make frequent use of interior monologues, and these, in turn, offer readers some lengthy but informative insights: “I have no strength for anything more, my chest constricting as a feeling of overwhelming responsibility and rising inadequacy churn through me,” says Zlaifë at one point. The numerous players do take time to develop, but the author still manages to imbue each of them with realistic thoughts and existential fears as the story progresses. And although these many thoughts and fears—and food descriptions—fill a great many pages in this lengthy book, readers will find the end result to be nothing short of epic.

A sci-fi saga that asks a lot of its readers, but the payoff is a highly nuanced sci-fi experience.