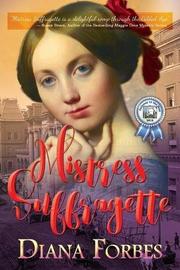 “Imagine being sent to a party with a gun pointed at your head.” In 17-year-old Penelope’s case, the gun is metaphorical but a burden all the same—her father’s bank has suffered huge losses during the Panic of 1893, and her erstwhile fiance, Sam Haven, has cut her dead because of it. Penelope’s mother is determined to marry her off quickly to save the family’s fortunes. But instead of meeting an eligible bachelor, Penelope falls for rakish, married Edgar Daggers, whose stolen kisses turn her into “ice cream melting.” She has just enough willpower to resist becoming Edgar’s “personal secretary” in New York and flees to Boston with her best friend Lucinda, who wants to “join forces with the women who seek to improve the lives of women.” Through Lucinda, Penelope meets bloomer-wearing activist Verdana Jones. She shocks Verdana—and herself!—by cogently defending “Irrational Dress,” saying that “corsets and petticoats offer some structure...in a world that unravels as I speak.” Verdana thinks they’re a great team, and soon Penelope finds herself caught up in the fledgling women’s rights movement, even as the tempting Edgar Daggers comes back into her life. What will win out in the end—clandestine love or Penelope’s desire for independence? A delight from beginning to end, Forbes’ novel is full of funny, authentic moments, like poor Penelope’s ignominious accident when she tries to ride a bicycle in skirts, and striking metaphors (“an uncomfortable silence loomed...thick as soda bread”). Forbes paints the smallest details of fin de siècle society—the pop music, the interior décor, the “Beecham’s Pills” Penelope takes for a hangover. In fact, the book feels like it was written at the time, reading like an alternate, feminist take on The House of Mirth’s “well-born lady in reduced circumstances” with a decidedly happier ending.

A sprightly, winning historical novel about an unexpected romance—between a young woman and her own power.

Gone with the Wind

“It is a truth universally acknowledged, that a single man in possession of a good fortune, must be in want of a wife.” Jane Austen: Pride and Prejudice

I have excellent phone manners