Diana J. Meyer is a secretary, author, and aspiring novelist with a meticulous background in editing and proofreading. She has been a bookkeeper for the family construction company for more than twenty years and a former administrative assistant at her church which has given her vast experience in the written and spoken word, detailed computer skills and a genuine heart for people. Diana’s professional experience includes being an administrative secretary, bookkeeper, and a published author. She is married to Jim (a Construction Contractor); four children and eight grandchildren have graced their lives. She currently resides in Hastings, Nebraska and continues to write novels, travels when time permits, and enjoys her family.

“Debut author Meyer became a champion of parents' rights after her toddler son Chad Green was diagnosed with leukemia in 1977.”
– Kirkus Reviews 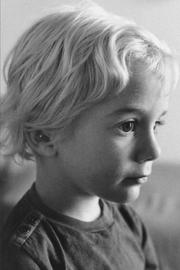 The mother of a childhood leukemia patient remembers the landmark battle over his treatment.

Debut author Meyer became a champion of parents’ rights after her toddler son Chad Green was diagnosed with leukemia in 1977. In defiance of a Massachusetts court order requiring that the boy continue chemotherapy, she fled with him to Mexico so he could receive alternative treatment, including laetrile, a controversial remedy derived from apricot seeds. Chad died in 1979, at the age of 3. Now in this book, Meyer provides a thorough account of the battle that pitted her against the medical establishment. “It’s of utmost importance to me...to enable others to see Chad not just as a cause or a newspaper story; he is a brother in arms to all children who suffer with an incurable disease,” she writes. The book spares few details of Chad’s diagnosis and initial treatment by a pediatric cancer specialist, Dr. John Thedman, at Massachusetts General Hospital. As Chad receives his first spinal tap, his mother “suffered with him, wishing I could take his place; praying for some miracle to release my baby from this nightmare.” Wishing to counter the side effects of the chemotherapy, Meyer and her then-husband fed him carrot juice and vitamin supplements but encountered almost universal opposition from the hospital staff. “Mrs. Green, nutrition does not work!” she recalls Thedman telling her. The “tug-of-war” over Chad’s treatment ended up in court, where, at one hearing, Thedman testified that the enzyme enemas the patient was receiving at home might give him an anal fixation. That, Meyer later responded, was like saying swallowing all of Thedman’s pills would “give Chad an oral fixation.” More secular readers may struggle to get past the book’s strong religious undercurrent—the author is a devout Baptist who began speaking in tongues “joyously” after viewing a show on the Trinity Broadcasting Network. But Meyer delivers a compelling and often chilling examination of the court clash. Her story will likely tear at readers’ hearts as she travels from maternal indignation to an acceptance of the demands that both sides of the fight over Chad confronted. “It is a heartfelt tragedy,” she concedes, “that instead of cooperation, our issues placed us in a war that had no victors.”

The author provides valuable insights into the pressures facing not only the parents of young cancer victims, but also the doctors who treat them.

The Legacy of Chad Green