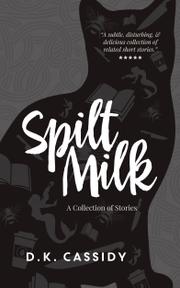 Overweight George craves love to a dangerous degree but has never received a lesson in healthy affection from his dry, depressive mother. As a result, his sad life revolves around obsessions that bring him comfort in solitude: collecting objects, including stolen library books and action figures, and binge eating, during which he tells himself that his food orders are part of his imaginary work and social life. Caleb was born addicted to heroin, thanks to having an addict mother who died in childbirth, and his explosive, alcoholic father makes his life a living hell. Caleb takes out his hate on neighborhood animals until he graduates one day to a more familiar target. These two unfortunate men make several disturbing appearances in this collection, while other morose, maniacal, and morbid personalities take center stage only once each. They include Cinderella’s stepmother, who can’t be convinced that mutilating her daughters’ feet was a bad idea; Jared, who pushes himself and his bladder to their limits in order to have a sense of belonging; Kim, whose crippling migraine headaches and traumatic memories make her an emotionally hollow mother to her two young daughters; and Pria, who suffers from a compulsion to pluck things, including eyebrows, pigeons, and pickles. Cassidy’s roster of characters runs the gamut of emotional dysfunction and situational sadness, but just when the sorrow gets a bit too heavy, her easygoing prose and black sense of humor take the edge off. For example, in “Invisible Joy,” a melancholy woman named Joy mentally lists “things not to do today: Panic. Feel regret. Drink any alcohol. Take more than 2 naps.” With a few exceptions, though, none of these characters is particularly likable. The author isn’t in the business of redemption, either, as the upsetting story arcs have no happy endings. However, Cassidy writes with such nuance that no matter how foul the character, there’s always a bit of humanity shining through. These tales will certainly make readers squirm, but that’s a small price to pay for this poignant glimpse into how human lives can careen away from the norm.