Dominic Anton is a writer of poetry and other works, currently studying communications at Florida International University. Dominic is heavily passionate about spirituality, the concept of rebirth and the power of evolution to reach one's full potential. He is also interested in the mythology of different culture's and digging deep beneath the surface of a multitude of concepts to analyze what other's merely glance over. All of Dominic's interests weave their way throughout WATER within the four different elements that are needed for us to survive.

"Dominic has addressed many interesting subjects such as healing, mindsets, reality, freedom, influence, religion, equanimity, manifestation and adolescent dilemma in his short and long poems, displaying his command over the concepts as well as vocabulary. I am very impressed with the wide range and nobility of thoughts Dominic has expressed so elegantly in this book, “Water” and recommend it wholeheartedly." - Amazon Customer Review

“..But it’s the less didactic lines, as in a knockout poem like “Narcissus,” and the pure energy of surprising images, as in the fantastic downward view of a body’s wounds, “with lightning everywhere” under the skin, that shine.”
– Kirkus Reviews 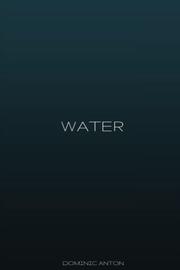 Anton’s debut poetry collection places the body and spirit in a dynamic relationship with the cosmos.

The collection comprises four parts, each named for an element, and features short, often rhyming poems. In “Water,” an angry speaker mourns the fallout of political violence; the bombs, the blood, and the refugees create a contemporary hell. The effect of the violence, expressed in the language of war, is to obliterate the narrator: “They pressure me, I detonate.” The destruction of the speaker shows the direct, unavoidable effects of the external on the internal. The section “Earth” abstractly comments on the unpredictability of the everyday via landslides, erosion, cracks, roots, dirt, as well as flowers. A striking poem titled “Blossom” describes lovers as part and parcel of natural processes, blooming at night from the earth. “Water” is less successful, though a concrete poem in the shape of a temple impressively portrays the dissolution of fiery desire to watery lust. Many pages present two- or three-line “definitions” of a concept named in the title (almost all titles in the book appear below the poems, after a long dash, which creates the question-and-answer effect of a riddle). An aphoristic tendency, sometimes ironic, runs throughout: “Time always heals the pain. / But sometimes it feels as though, / The clock has stopped.” A phoenix appears sporadically, giving some balance to the bleaker moments. Finally, “Air” returns to the outward-looking impulse of compassion: “One spirit is worth the same as another,” a tired-sounding speaker says, imparting that equality should be obvious. But it’s the less didactic lines, as in a knockout poem like “Narcissus,” and the pure energy of surprising images, as in the fantastic downward view of a body’s wounds, “with lightning everywhere” under the skin, that shine.

Elemental forces give potency to these simply worded poems.

Memoirs of a Geisha

To take my two passions, writing and music, and turn them into a career