Don Brobst, born in New Jersey and educated in Chicago, is a practicing physician and the Medical Director of the State of Alabama. Trained in family practice in Illinois, Don and his family moved to Birmingham in 1993. A proven leader in the field of medicine and member of the American Academy of Occupational and Environmental Medicine, he divides his time between his practice, family, writing, and working in Africa.

The dedicated father of three wonderful children, Wendy, Jonathan and Andrea, he’s passionate about writing while understanding the importance of family, which includes six grandchildren.

Spending time in New York is one of his driving passions, even though he is unable to spend the time he would like in his favorite city in the world.

Working in the villages of Sudan, Don leads teams that deliver desperately needed medical care to the poor and needy deep in the African bush, as well as refugees throughout Egypt and Ethiopia. Delivering medical care to those who need it most, he considers himself deeply fortunate to be in a position to do so, regardless of the risks and inconveniences of life on the front lines.

Because of his work in the heart of these nations, Don is in an unusual position of trust, which allows him access to areas of the world considered to be “off limits” to non-medical personnel. The insight he’s gained from these operations has been the key to unlocking secrets revealed in The Ghost of Africa and the sequels that follow.

Don thrives on adventure, intrigue, and adrenaline. His pursuit of the thrill is not thrust upon him—it is that which makes him unique, and opens doors otherwise barred. He will go wherever he can to do what he can.

“Brobst is a talented storyteller, and he expertly unspools his plot to maximize both tension and suspense. He draws on his own experience as a doctor and traveler in Africa to create a world that feels both weighty and credible . . . A well-constructed, immersive adventure set in Central Africa.”
– Kirkus Reviews 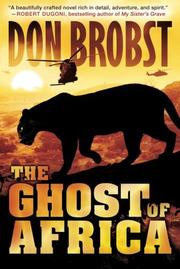 The Ghost of Africa

Brobst (Thirteen Months, 2011) tells the story of a doctor’s attempts to save lives amid a civil war in his new thriller.

Dr. Paul Branson is returning to the tiny village of Matta in South Sudan for the first time since the death of his wife, Nicki. Establishing a clinic for the villagers of Matta was a dream Paul and Nicki shared, and he feels compelled to continue their work in her memory even if it means leaving their daughter back in the States alone. The villagers, particularly a leukemia-afflicted girl, Leza, give Paul a reason to get up in the morning, but there are greater troubles in South Sudan than Paul’s grief. A terrorist group, the Lord’s Resistance Army, under the command of the brutal Jason Quinn, has learned that Paul was involved in chemical weapons research as a graduate student. He discovered something so potentially dangerous the U.S. government has sworn Paul to secrecy. Quinn has plans for Paul’s information, however, and is willing to go to great lengths to achieve his aims. What’s more, a man-killing panther stalks the night. As a Matta elder reminds Paul, “The black panther is the shadow of death. We call it the Ghost of Africa, and for a reason. Its presence means something evil is about to happen or that someone is going to die.” Paul came to Africa to save lives, but he may be forced to do just the opposite. Brobst is a talented storyteller, and he expertly unspools his plot to maximize both tension and suspense. He draws on his own experience as a doctor and traveler in Africa to create a world that feels both weighty and credible. Though the plot drifts uncomfortably into white-savior territory (Paul is deemed the “Chosen One”), the supporting characters are vibrant and fully realized.

When Dr. Bailey Pogue becomes a trained informant for the FBI and CIA with orders to infiltrate a crime syndicate triad, he never expects his double life to cause those who love him to be the most suspicious. In order to stop the trafficking of young girls and defeat a government espionage leak that threatens to upset the balance of power in the Middle East, must Pogue compromise his faith in God—or is there another way? As he struggles with the deception of spying on his best friend, Nicholas Gambrel, Pogue also regrets the life of lies in which he has become entangled. His love for his wife and a call to duty place him in the epicenter of a moral struggle to do what’s right.

In a society where love has been tainted and marriage destroyed by the ways of this world, Thirteen Months is the depiction of the ultimate love between a man and a woman, the way God intends it to be. In the face of unspeakable tragedy, every aspect of one couple’s adventures, both past and present, has forged the bond between them that will carry them into the center of God’s plan. As a physician finding himself in the heart-wrenching position of being totally and utterly helpless to save the love of his life, Don has no power to overcome this foe, save for his faith in God and the power of prayer. A romantic and deeply touching story, Thirteen Months seeks to inspire on every level. It reaches out not only to those finding themselves fighting for their lives, but for couples everywhere who desire more in their marriages and who need to see the fullness of love and depth of romance God desires for them.
Published: June 8, 2011
ISBN: 1449713106