Don Dahler is a critically-acclaimed writer and award-winning journalist. For decades, viewers have watched his news reports on various networks, including CBS and ABC. He was the first network correspondent to report from Ground Zero during the terror attacks on the World Trade Center. As a war reporter, he filed stories from Kosovo, Southwest Africa, Afghanistan, Israel, and Iraq.

When not traveling, Dahler lives on a small farm in New Jersey with his wife, two children, twelve chickens, four goats, two horses, two cats, and an energetic Border collie. He is in the process of converting a 1971 Opel GT into an electric vehicle, which is a frustrating endeavor.

“A fun diversion with a bracing hero and sequel potential.”
– Kirkus Reviews 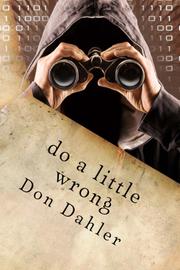 DO A LITTLE WRONG

A random recent photo of a man presumed dead following the 9/11 attack spurs an investigative team to try to determine the truth about his disappearance—by any means possible.

Kyle Royce lives a double life in the manner of Bruce Wayne. He is the frontman for his family’s fabulously successful currency trading firm and nonprofit Royce Foundation. But his actual work is “cloak and dagger stuff,” tackling missing person cases “no one else can solve.” One such endeavor—which kicks off the novel in high gear—is rescuing a man’s son who had been kidnapped by a powerful Brazilian family. Royce and his team’s newest case, Phillip Peterson, formerly worked in fraud and security for a credit card company with offices in the World Trade Center. Was he killed in the terrorist attack, or is something more sinister afoot? Royce reassures Peterson’s sister that he and his “devoted staff with some unique skills and connections” will get results. “Our methods are sometimes unorthodox and, at times, controversial,” he admits. Or, in the words of Shakespeare, “To do a great right, do a little wrong.” But the hunters become the prey as their investigation uncovers the credit card company’s questionable doings. “There are some very powerful people and institutions that will not want the world to know this information,” Royce is warned at one point. Meanwhile, the Brazilians are stepping up pressure to retrieve the boy that Royce reunited with his father. But Royce has a simple lesson: “If you fuck with me, you will lose.” That kind of bravado makes the hero an enjoyable figure to follow around the world. He deserves future adventures that will hopefully further flesh out his colleagues. Only two, his best friend and former NFL player, Cleat Williams, and Jennifer Parks-Hudson, an investigator with whom Royce may have more than a professional interest, get major page time. Dahler (Water Hazard, 2010, etc.) lays on Royce’s badass attitude a little thick (“I can be a real grade-A asshole when I want to be. It’s a gift”) and character banter is strained, but the author keeps the plot moving with plenty of action.

A fun diversion with a bracing hero and sequel potential. 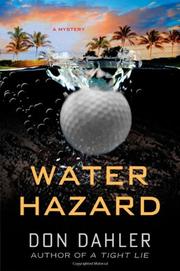 Golf fans and mystery mavens will rejoice at Dahler’s second appearance on the tour.

PGA golfer, lawyer and private eye Huck Doyle (A Tight Lie, 2009) has a sponsor’s exemption to the Sony Open that could jump-start his career. When his law-school friend Rick Wong’s father, the man who got Huck the exemption, is shot dead on the 17th tee of the Waialae Country Club, Huck is sucked into danger. Certain that an upcoming secret bank merger is the reason for his father’s death, Rick begs Huck to investigate. Because he’d promised his father that he’d never pry into his private life, he hands over his father’s computer to Huck. Suddenly Huck is harried by some mysterious tough guys whose behavior escalates from annoying to violent. Huck’s paraplegic brother, a former FBI agent, helps him crack encrypted computer files that unmask Mr. Wong as a pedophile who’d been making money from a disgusting business and implicate both his partner, a former Chinese general, and agents of the Chinese government as suspects in his death. Huck, who’s found his golf game, is trying to keep up the good work after winning the Pro-Am. Making the cut and emerging as the 36-hole leader, he merely has to stay alive long enough to solve the puzzle and try to win the tournament.

A hole in one full of can’t-put-it-down adventure, stroke-by-stroke descriptions of the play and a clever solution. 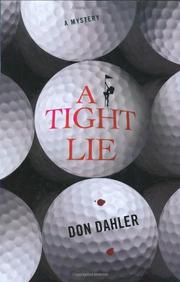 A golf pro’s adventures off the course put his life at risk.

Huck Doyle, a middling PGA golfer, also has a law degree and a p.i. license. When his acquaintance, Joniel Baker, is accused of murder, Huck reluctantly agrees to help. The superstar baseball player is placed under arrest for the rape and murder of a girlfriend he’d grown bored with. The forensic evidence surrounding the murder of a second girl leaves Joniel looking even more guilty and Huck about to bail. This second victim worked at a strip club with Huck’s high-school flame, a born-again straight arrow who Huck is sure would never do the drugs he finds in her apartment. Not until his old flame disappears and he’s threatened by thugs does Huck start to buy Joniel’s story that he’s been framed. Both Huck’s father Pete, a disgraced L.A. cop, and Huck’s older brother, a paraplegic ex-FBI agent, have a lot of connections. That’s nice for Huck, who’ll need all the help he can get when he finds out an East Coast Mafia family may be behind the murders. Torn between his father’s success-at-any-cost mentality and his brother’s high ethical standards, Huck has a difficult time coming up with a solution that will get him back to Pebble Beach alive.

A promising debut whose hero, tough and literate as Spenser and cool as Freddie Couples, will appeal to golfers and hard-boiled fans alike.