Don Johnston was born in East Texas. When he was five years old, he found a tattered science book with several pages missing. The first intact page showed a butterfly emerging from a chrysalis. That incident was the "ah-ha" moment that drew him into the world of science. Upon completing high school, Don joined the Air Force and served as a jungle survival instructor in Panama. Following military service, he enrolled in college and graduated with a degree in biology and chemistry. During his career, Don wrote numerous technical articles and research reports, some of which were published in trade journals, but he wrote no fiction until he retired. "The Dar Lumbre Chronicles" is Don's first foray into the world of self publishing.

“In a future socialist America, Houstonians face the vicissitudes of life as a rising political/religious movement predicts the imminent return of a vanished scientist as a medical messiah.”
– Kirkus Reviews

A prequel to Johnston’s first novel, The Dar Lumbre Chronicles (2018), this outing takes place 90 years earlier, in 2045. America—NatGov—now has only one major party, and the “Republic of California” has seceded from the union. NatGov’s new president is Rex Horn, a billionaire who’s already up for impeachment for several reasons, including wild plans such as mounting a search for Planet X, supposedly the solar system’s 10th planet. Darien Segura, 22, an astronomy undergraduate at New Mexico State University Alamogordo, also believes that Planet X exists, something he hopes to research. He gets his chance through a Horn-backed government project to investigate whether radio waves emanating from a star cluster represent extraterrestrial contact. Also joining the project is Carly Hansen, new to NMSU as a graduate student in psychology, specializing in parapsychology. Their work indicates that extrasensory perception, especially between twins, could decode a message possibly buried in the radio waves. Startling findings take the team deep into Panama’s jungle, where Darien, an adoptee who has some ESP ability, was born. There, he might find a twin—and answers. First contact is an intriguing hook, made more effective through believable details of carrying out scientific research and rainforest trekking, bolstered by Johnston’s background in biology, chemistry, and jungle survival. Satiric political elements add entertainment as well. Less successful, though, is a subplot concerning a tepid romantic triangle between Darien, Carly, and her longtime boyfriend. The novel also falters in pacing and structure: Inessential details slow things down (including minutiae about an Orange Bowl college football game), and the ending doesn’t deliver on the premise, instead only hinting at a real payoff.

A plausible story of extraterrestrial contact with a disappointing lack of resolution. 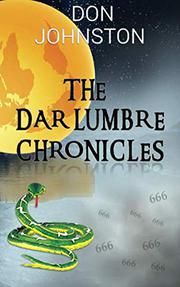 In a future socialist America, Houstonians face the vicissitudes of life as a rising political/religious movement predicts the imminent return of a vanished scientist as a medical messiah.

Johnston labels his debut dystopian novel as “science fiction laced with political satire.” But in his deadpan tale, the biggest gag many readers will note is the author cheekily including himself in a future archives as one of sci-fi’s “old masters.” Otherwise, disillusionment with government and mistrust of the Establishment could come straight from today’s headlines and bloggers. America in 2135 is an economically troubled, socialist nanny state, intrusive, abusive, paranoid, and incompetent—whether it’s Democrats or Republicans operating “NatGov.” Some 50 years earlier, an enigmatic Mexican-born genius, Dar Lumbre, threatened the status quo of nationalized health care with his politics, sparking a warrant for his arrest. But he disappeared during the chaos after a providential solar flare erased the surveillance state’s digital records. Disciples since have prophesied Lumbre’s messianic return, bringing freedom and a formula for eternal life (thanks to Johnston’s med-tech savvy, the Jesus parallels are more intriguing than contrived and labored). In Houston, geneticists Crane Hopkins and Annie Lee study Lumbre’s own heirloom tissue samples, which hold amazing, restorative DNA applications that even NatGov allows (while it bans the scientist’s writings). But the sacred flesh is failing over time. Meanwhile, Crane’s freelance programmer brother becomes enmeshed in a Lumbre social movement (with cultish overtones) that may lead him astray, politically and in his fragile marriage. Hanging over the characters is the threat of NatGov’s wrath, but Johnston shies away from action-violence and simple black-and-white morality with a resolution more about science puzzles and societal problem-solving than chases or fights. Some may find the author’s conclusion almost too upbeat for the likes of NatGov. Others will enjoy that late in the ingenious narrative he embeds a shoutout to Kurt Vonnegut’s The Sirens of Titan, which is pretty good company for Vonnegut as well as Johnston.

A clever extrapolation of today’s sociopolitical pathologies to the next century, with an uncommonly optimistic dose of medicine in the end.

The Man In The High Castle