Don is a retired professor of radiology from The New York University School of Medicine where, for nearly thirty years, he taught and did research. This followed stints at a medical school in North Carolina and at The Argonne National Radiation Laboratory in Illinois. He’s been writing nearly all his post-adolescent life on scientific subjects (authored and co-authored four widely-used books in radiology and cancer care), as well as fiction. Prior to retirement, he frequently lectured at major medical institutions in the US and Canada . His fiction, quite divorced from radiology, examines characters trapped in isolation by familial expectations and repression, guilt for sins they have not committed but must expiate (such as Original Sin for which all are guilty but none have committed), or because they are poor fits in society. His story "Angel of Mercy" has won several prizes for short fiction. A very great compliment for Don is to be told his fiction is Poe-esk and/or Kafka-esk. Those authors are among his literary heroes.
Don loves, books, classical music, jazz, theater, and hiking in natural settings where many of his best ideas come to him. He has four children and lives with his wife, a daughter, and her husband, in Brooklyn New York. 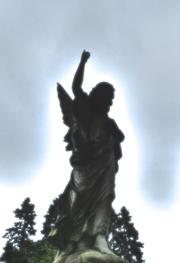 This debut collection offers a series of disconcerting tales in which characters experience horror that’s more metaphysical than palpable.

In many ways, this book is populated by prisoners, beginning with “Angel of Mercy,” in which quadriplegic Marcus Ambrose is at the mercy of his caretaker wife, Elena. But as the story reveals, he may have already been locked inside a seemingly cold relationship. Fate often directs the characters, leading them to unavoidable dark conclusions and making all the tales rather gloomy. In “The Butterfly,” for instance, Benedict and Star’s sexual congress is enhanced when she demands he bite her fresh wound. But once the cut heals, Star will inevitably crave much more. Similarly, the unnamed female narrator in “Satan’s Lure” tends to the hungry and helpless Vern, hiding in the cellar from her father. But it isn’t long before the two give in to their primal urges. There’s religious allegory running throughout the volume, but like the stories’ horrific elements, Pizzarello effectively downplays it. Two of the more notable examples are the successive “The Silence” and “Fugues.” With shades of Kafka’s The Trial, the former follows an unknown man who may be facing punishment but is unaware of any crime (or sin) he’s committed. In the latter, Arnold is so intent on appeasing his Roman Catholic parents that he’s hiding within himself, an entity that sticks close to the marrow and sees Arnold as an automaton, only occasionally taking over. A standout among a stellar series is “The Stranger,” in which Nugent becomes fixated on a stranger who has way too much clout for having just arrived in town. Nugent’s paranoia turns dangerous, as he starts seeing anyone with a smirk like the stranger’s as a “minion” and himself as the people’s savior. It’s astounding that Pizzarello manages to end every story with a punch. There’s definite resolution in each case but always with a lingering uneasiness: what if, say, there’s merit to Nugent’s obsession? The book’s other tales, “The Gift of Life” and “Tabula Rasa,” are tender but ultimately unnerving companion pieces, featuring, respectively, a man with terminal cancer and a guy asking his best friend to be a sperm donor.