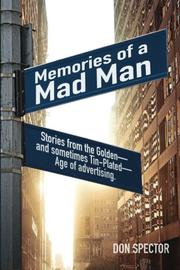 Memories of a Mad Man

A retired adman shares tales of hawking everything from Tareyton cigarettes to the AT&T Yellow Pages in this debut memoir.

For decades, Spector made his living in advertising, and he enjoyed every minute of it. If you’ve ever bought a bottle of Smirnoff vodka or booked a room at the Ramada Inn, he might have had a hand in your decision. (And if you’ve ever cursed that earworm tagline for Wisk detergent, “Ring around the Collar,” he brought you that one, too.) This memoir of those crazy days of three-martini lunches and large-busted secretaries appears designed to capitalize on the immense success of the former AMC TV series Mad Men. His anecdotes are breezy and brief with an inviting gloss of insider knowledge. Consider one Apple computer ad featuring one of Spector’s idols, legendary sci-fi author Ray Bradbury: according to Spector, the reason Bradbury looked so energized and engaged in his photo is because when the picture was taken, they were discussing porn star Linda Lovelace. He also tells of an ultrasecret meeting in 1970 regarding “Project Red Eye,” which turned out to be an early demonstration of the fax machine (“Coast to Coast in 6 Minutes” the copy brags). In a chapter titled “The Truth About Truth In Advertising,” the author remembers testing a shaving cream’s claim that it’s so good, “it can shave sandpaper.” It turned out to be true—depending on what kind of sandpaper you used, he notes. Spector can be quite funny, as when he avers that “The expense account is probably responsible for more hangovers than anything else in the modern world.” The book’s major drawback, though, may be the Mad Men hook that initially grabs one’s attention. This may mislead some readers, because although Spector hints at wild times, his behavior is that of a gentleman; he may diss a colleague who likes to take credit for others’ ideas, but that’s about as far as he’ll go. Still, although Spector isn’t as naughty as Don Draper, he still has plenty of stories to tell. He’s a genial companion for a whirl around Madison Avenue’s not-too-distant past, and fans going through Mad Men withdrawal may still find that Spector’s book helps ease their pain.

A lightweight but engaging look back at days of long lunches and seemingly infinite expense accounts.