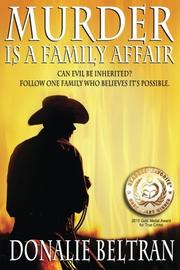 MURDER IS A FAMILY AFFAIR

A true-crime drama follows the deadly exploits of a madman who always seems to stay one step ahead of the law.

Born in 1831, August Tuxhorn grew up in Prussia under the cruel tyranny of his father, Henry. When Henry committed suicide, August resolved to make his way to the United States with money he had long been secretly saving. He forged documents to allow him to leave the country, an act of fraudulence discovered by a fellow Prussian while August was in New Orleans. August murdered the man and a prostitute who discovered his hoard of cash. He then killed and framed the local banker for the crimes. August then made his way to Illinois, where he bought a large tract of land and began transforming it into a successful farm, becoming well-known for his violent temper. He married Elizabeth Birkenbuehl, a local waitress and fellow Prussian, and the couple gave birth to several children—Charles was the first and most unruly of all of them, made vicious by his father’s savage abuse. Eventually, Charles grew old enough to fight back, and August sent him to Kansas with a visiting cavalry regiment. Charles settled in Missouri and continued his father’s legacy of violence and murder, always slyly capable of evading arrest. He eventually married Eva Whitmore and subjected her and their children to grim mistreatment; he was finally charged with child abuse. Refusing to admit defeat, he liquefied his assets, killed his two sons, and burned his own property down to the ground, escaping yet again. Beltran’s (Trapped!, 2016) painstaking research is clearly evident, and her unadorned prose brings the story to vivid life. The author’s family story—she was adopted by Charles’ grandson, making the killer her great-grandfather—is a chilling one, and she intelligently raises probing questions about the lineage’s legacy of suicide and sadism. In addition, Beltran wisely leaves those questions without definitive answers, fodder for readers’ contemplation. The book reads like a novel, which clearly required some measure of fictional embellishment, a creative contribution supplied with skill and restraint.

A dark tale of murder all the more astonishing since it turns out to be true.

MURDER FOR A MOMENT

A BODY HAS BEEN FOUND IN A CHURCH. WAS IT SUICIDE OR MURDER? FOLLOW LOU MCGREGOR AND DONNA DECKER, INVESTIGATORS FOR THE WICHITA P.D., AS THEY TRY TO DETERMINE WHAT REALLY WENT ON THE NIGHT HENRY WILKERSON DIED.
Published: May 11, 2017
ISBN: 978-0989636278

Detective Duncan has his hands full. After being assigned the case of a missing three-year-old child, people around him start dying. The only thing they have in common is the Sunflower left by each body. Who could want these people dead? And why? Are the murders connected to the kidnapping? Could there be more than one killer? Roger Duncan has become obsessed with this case and the photo of the child he carries with him everywhere. She captivates his every thought. The Detective knows he has to find her or he will lose his mind., But can he - before it’s too late for both of them?
Published: Sept. 20, 2017
ISBN: 978-0989636261

CAN A WAR-TORN VET SAVE THE WOMAN HE LOVES, IN A WAR AT HOME? Tag was a bomb specialist in the Marine Corps, with two tours behind him. Leaving the military, he went home with nightmares and the inability to get a job. PTSD eventually led him to the bottle. Unfortunately, he didn’t know the war was still going on at home. Nine months pregnant, his wife is caught in a terrorist attack on a U.S. Post Office. Who could the terrorists be? More importantly, will she and her unborn child make it out alive? They will if Tag has his way, but odds are not in her favor as more bombs go off, wreaking havoc on those still trapped! All the police know is the note they received a few days earlier which read: "BE PREPARED FOR CHAOS X 10!"
Published: Dec. 12, 2016
ISBN: 978-0989636247