Douglas Carnine, a professor emeritus from the University of Oregon, began his pursuit of scientific research, instructional design, Buddhism and martial arts when he was 21. His academic career focused on failure to thrive children and lead to him receiving the Lifetime Achievement Award from the Council for Exceptional Children.
After retiring, he became curious about the importance of kindness from working with men convicted of murder and serving as a hospice volunteer. After reviewing the research on kindness, he decided to devote his writing and his advocacy to making the importance of mindful kindness more prominent. The resulting project is his website Feedkindness.com along with the books How Love Wins and Saint Badass.

“An illuminating and hopeful account of inmate rehabilitation through Buddhist teaching.”
– Kirkus Reviews 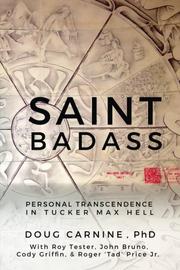 A retired education professor corresponds with prisoners who find peace through Buddhism.

Introduced to inmates at the Maximum Security Unit in Tucker, Arkansas, through his social activist daughter, Carnine (How Love Wins, 2017) began corresponding first with debut author Tester, eventually widening his epistolary acquaintance to three others. Tester had been drawn to meditating after seeing a fellow prisoner at Tucker Max discover tranquility through the technique. Carnine, a lay Buddhist minister, encouraged Tester and the other inmates—debut authors Bruno, Griffin, and Price—not only to meditate, write letters, and read the books he sent, but also to practice kindness with the other prisoners. The four men seemed unlikely Buddhists, having already committed crimes that were against the religion’s teachings. But Carnine, along with his wife, Linda, encouraged their development over a several-year period. While some of the acolytes occasionally slipped up—using cash Carnine sent them for the kindness project for their own needs—the enterprise overall succeeded, helping the originators find a degree of serenity in their circumstances and introducing both inmates and prison employees to Buddhist principles. In this absorbing book, the four incarcerated authors share their back stories; all of them were raised by abusive parents in unfavorable and unpleasant circumstances. While their early hardships fail to justify their eventual heinous crimes, the information does enlighten readers about their life experiences. The inclusion of excerpts from letters and the varying points of view enrich the text. As with the inmates’ back stories, the injustices and crimes committed inside Tucker Max will be eye-opening, if not shocking, to many readers. The prisoners’ occasional despair—particularly that of Tester, who also suffers from debilitating pain—is often palpable. While Carnine may have edited the contributions of his co-authors, the book is well-written. Some of the inmates’ jargon may be new to readers, but Carnine supplies a brief, useful glossary of Buddhist terms.

An illuminating and hopeful account of inmate rehabilitation through Buddhist teachings.