I live in the American South and consider myself both a writer and a novelist. I take great pride in my writing, enjoying the craft involved and the time spent in the journey. It's all about the word. My writing tends to involve ordinary people in extraordinary circumstances and is often informed by medicine, though I rarely write about medicine directly (and I have zero interest in writing about medical bureaucracy). I write stories that take readers on an adventure—one they might not otherwise take on their own, one they can't put down despite the late hour—and their constant squirming. When a reader finishes one of my stories, they not only want more, they know they've read something they won't easily forget. My stories showcase historical fiction and the supernatural, especially ghosts. My stories are intense.

I am an alumnus of many different writing workshops, including the Sirenland Writers Conference (2012) sponsored by One Story magazine, Borderlands Press Bootcamp for Writers (with Tom Monteleone), and the Algonkian Writers Conference with Michael Neff. I have been mentored and have enjoyed a working relationship with the USA Today best selling novelist David Poyer for a decade. I received honorable mention in the Seventeenth Edition of the Year’s Best Fantasy and Horror (2003), was showcased with a feature article in Southern Writers Magazine, and have been published in Paradox Magazine, The Summerset Review, The Armchair Aesthete, On The Premises Magazine, and others.

For anyone who might be interested, I am also a graduate of Stanford University and a practicing neurosurgeon. I am board certified in the practice of adult and pediatric neurosurgery.

“McDaniels has a remarkable talent for understated depictions of horror...”
– Kirkus Reviews 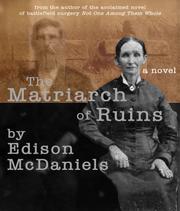 The Matriarch of Ruins

A Civil War novel that follows the struggles of a family as their world crumbles around them.

Purdy Gamble’s husband is a soldier in the Union Army, and she hasn’t heard a word from him in about two years. She discovers that he’s been wounded and sets off to find him in a town named Falmouth. There, she encounters the collateral damage of war: a town besieged by poverty and with a populace hobbled by fear and spiritual dissipation. She finds her husband, Enoch, in a makeshift hospital where the dead and the dying commingle in alarming proximity. He’s badly wounded, with one eye completely maimed. Soon after Purdy transports him to a place where he can get better medical attention, he dies. She returns home to care for her family—a disabled son and two daughters—on her own. Her oldest, a 19-year-old daughter, is still reeling from the loss of her infant son and the absence of her husband, who’s away at war. A Confederate troop commandeers Purdy’s house against her will and transforms it into an improvised hospital; as a result, she has no choice but to bitterly cooperate with the people responsible for her husband’s death. Later, both her daughters must fend for themselves in a land grimly transformed into killing fields. This is the second installment in the Gettysburg Trilogy, and while there is some narrative continuity with the first, it can be read on its own. Author McDaniels (Not One Among Them Whole, 2013) has a remarkable talent for understated depictions of horror, letting the chilling facts speak for themselves: “On the Gamble farm, morning announced itself as the harsh screech of the surgeon’s saw against bone. It was an awful thing to hear, impossible to tune out.” Like its predecessor, the book explores the bottomless acrimony of the two warring sides and also mines rare opportunities for mutual respect and even affection. McDaniels also artfully captures the terrible juxtaposition of the battlefield and the homestead. 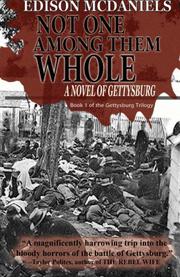 Not One Among Them Whole

A Civil War–era novel that documents the grim wages of battle.

The story begins by establishing a ghastly tenor of barbarity. The family of Cuuda, a black child, hides him in a box to keep him from harm as they travel. From inside the box, he hears the murder of his family members, but he later frees himself in order to find food. A traveling mortician named Jupiter Jones eventually rescues him; he’s a “showman and purveyor of the extraordinaire,” traveling from town to town, tricking the afflicted into buying his curative oil. He stole its essential ingredient from a tribe in Africa and although it does genuinely have medicinal powers, it also causes madness. Still, the war brings him plenty of business as the dead litter the countryside of the North and South. Meanwhile, three Union doctors—Solomon Hardy, Josiah Boyd, and Tobias Ellis—struggle to keep pace with all the wounded men sent their way. Debut author McDaniels affectingly describes scenes of battle, but his most achingly poignant depictions are of war’s aftermath: “The church-turned-hospital had become a horrid place…where four men died every hour day and night and the rain and blood ran as red mud across the ground.” The surgeons work indefatigably to save whomever they can, comfort the rest, and try to preserve their own sanity. In another storyline, a Union soldier, Ezra Coffin, is badly wounded in battle in southern Pennsylvania and finds himself beside Maj. Tom Jersey, a Confederate soldier who’s just as badly hurt. Despite being enemies, they forge a kind of friendship due to their shared anguish and looming mortality. McDaniels skillfully braids these multiple plotlines into a coherent whole, but his quick leapfrogging from one subplot to another can be wearying. Also, the story’s impressive historical authenticity comes at a price of unrelenting gloominess, so readers should prepare for a dexterous but austere experience.

A gritty, unalloyed treatment of a savage conflict.

Not One Among Them Whole

Blood Meridian, or the Evening Redness in the West

The first paragraph of COLD MOUNTAIN captured me such that I have never been the same. Poetry, pure poetry. I have been trying and failing to write such an affecting & effective paragraph ever since.

The Weight of Potter's Field