E.J. Chadwell grew up in the South Bronx. As a latchkey kid, she spent most of her free time at the Mott Haven branch of the New York Public Library, where she developed a lifelong love of reading.  Her father, a postal worker, and her mother, an office worker instilled in her the value of education.  Chadwell graduated with a post graduate degree in library science, after which she worked for more than 10 years in print and broadcast media for a major newspaper, a national television talk show and a production house where she wrote script treatments for cable shows such as A&E’s The Unexplained, American Justice, and Biography.  She has also worked as a publicist and a freelance journalist, publishing magazine articles  before turning to books. A voracious reader of mysteries, Chadwell is an active member of Mystery Writers of America, International Thriller Writers, International Association of Crime Writers and Sisters in Crime.

“A clever tale of cops whose entertaining rivalry is both affecting and conducive to solving murders.”
– Kirkus Reviews 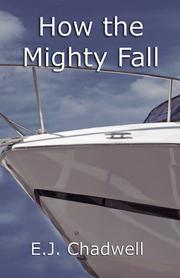 How the Mighty Fall

The case of a media mogul who goes inexplicably missing from her own yacht turns into a murder investigation for two New York City detectives in Chadwell’s debut thriller.

The fact that Detective Gigi Mirabelli still has two months of maternity leave to go doesn’t stop her godfather, Chief of Detectives Jimmy Frail, from throwing a case her way. But it’s a high-profile one: multimillionaire media mogul Connie Ross has vanished during a yacht party, and Mirabelli specializes in missing persons cases. Frail pairs her with homicide cop Harry Burns, and the two butt heads almost immediately. Mirabelli hopes to remain lead detective as long as she can until they’re certain that someone actually killed Connie, while Burns is looking to declare it a murder as soon as possible. Unfortunately, pinpointing the people who’d want to kill Connie isn’t so simple. Her fiance, Tre Langston, for one, is upset that she kissed her former lover onstage as a reputed publicity stunt, and she’d also just fired Sandra Spencer, the executive producer of The Connie Ross Show. The investigation changes direction when two people with connections to Connie die, one by subway train and the other after falling from an apartment window. The detectives realize that they must find common ground in order to stop a potential serial killer. What begins as a standard cop story gradually turns into an intricate mystery. Chadwell packs her tale with suspects and doesn’t provide overwhelming evidence that makes it easy for the police to unmask the killer. Mirabelli and Burns constantly rehash their theories, and their combative nature further complicates matters, even if readers know Connie’s fate right away. Burns is the quintessential cop character—borderline alcoholic, broken family—but Mirabelli has hurdles of her own, including an unhelpful husband and a mother-in-law who thinks she should stay at home. The novel is at its finest when the detectives interview people with rapid-fire questions until shocking information is revealed. It’s fitting that the duo, at one point, flip a coin to decide who gets to interrogate a particularly dubious person.

A clever tale of cops whose entertaining rivalry is both affecting and conducive to solving murders.

How the Mighty Fall: Bronze Medal in the Dan Poynter's Global E-Book Awards, 2016

How the Mighty Fall: Honorable Mention in the San Francisco Book Festival, 2016