Elaine Ambrose is a bestselling author of ten books and has won prestigious writing awards in three genres: humor, memoir, and children’s books. Her newest book is titled "Melody’s Magical Flying Machine" and will be released in November 2020. The book features a 10-year-old girl with Down syndrome who creates a magical flying machine. Kirkus Reviews wrote that the book is “A joyful, well-told story that celebrates the power of imagination.” The positive story is a beginning chapter book for children ages 7 through 11.

Her humorous books include "Menopause Sucks," "Midlife Cabernet," and "Midlife Happy Hour." Her children’s book, "Gators & Taters," won the 2018 Distinguished Favorite for Children’s Literature from the Independent Press Awards. The bilingual storybook, "The Magic Potato," was adopted by the Idaho State Board of Education for the statewide curriculum and won the prestigious 2018 Silver Medal from the Moonbeam Children’s Book Awards.

Elaine won two writing awards from the National Society of Newspaper Columnists for her humorous blog posts on The Huffington Post and on her own blog, and she’s also an award-winning syndicated blogger on several online sites. She organizes professional writing retreats with acclaimed faculty, and she is a popular motivational speaker at college commencement ceremonies, writing conferences, workshops, retreats, book clubs, and live comedy shows.

Ambrose is an internationally recognized syndicated blogger. In 2014, she authored a humorous post on The Huffington Post that went viral with more than 800,000 likes. The post, titled Don’t Fart During an MRI was reprinted in several countries in various languages and continues to gain fans. The post was named as of one of the Top Ten Most-Read Posts in the Ten-Year History of The Huffington Post. Ambrose was interviewed live from New York, Interview on Huffington Post Live-Streaming Network.

Another post on her blog, My Mother’s Body Got Lost, was chosen as a winning entry in the Voices of the Year Competition sponsored by BlogHer. Ambrose presented her essay at the conference in New York in July 2015.

Ambrose is the founder and facilitator of the quarterly Women, Words, and Wine Writing Retreat as well as the annual Write by the River Retreats sponsored by her business, Mill Park Publishing. Write by the River Retreats have featured New York Times bestselling authors including Anthony Doerr.
Ambrose is a popular humorist and speaker at conventions across the country, and she is active on several social media sites. Find more details at www.ElaineAmbrose.com.

“A joyful, well-told story that celebrates the power of imagination.”
– Kirkus Reviews 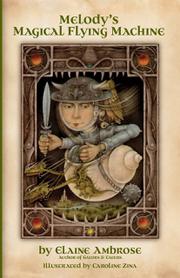 A fourth grade girl creates a magical flying machine with the help of an enchanted bird in this children’s book.

Melody, 10, loves hugs, daydreaming, singing, and storytelling. She also has Down syndrome; as she explains, “I can do almost everything other children can do, and I’m happy.” But she’s not so happy after being bullied by Robert, a new boy at school who mocks her storytelling and short stature. To feel better, Melody sits beneath her favorite daydreaming tree, where a tall creature with gray metal feathers introduces herself as “JuJu the Enchanted Bird.” JuJu helps Melody design and create a wonderful flying machine that looks like a giant snail shell powered by two dragons. At school, she swoops around in her machine, proclaiming: “I am Melody the tall and brave warrior.” Later on, Melody tells tales of adventure and magic to her enthralled classmates. Finally, even Robert comes around, saying: “I want you to know I like your stories. I’m sorry I was mean to you.” Though Melody is sad when JuJu must go, her friend reminds the girl of her strengths. In the end, Melody says, “I felt good about who I was and what I could do. I was a brave storyteller.” Melody is an engaging narrator whose cheerful affection, knack for happiness, and zestful imagination express themselves in every line. This extends even to her clothes; every outfit she wears is, in some way, her favorite. She appreciates others, delighting in her little brother’s silly knock-knock jokes. Whether or not readers have Down syndrome, most will relate to Melody’s sadness at social exclusion and benefit from the creative, self-affirming response that she demonstrates. Zina’s pencil illustrations are beautifully textured and shaded, with a magical quality that deftly matches the text.

A joyful, well-told story that celebrates the power of imagination.

Frozen Dinners - A Memoir of a Fractured Family

Winner of 2019 Distinguished Favorite for Memoir from New York City Big Books Award Program. Winner of 2019 Distinguished Favorite from Independent Press Awards. The compelling story of an intense, entrepreneurial father who rises from poverty to build a multi-million-dollar trucking empire hauling frozen food throughout the Northwest. After his untimely death, his survivors implode in a maelstrom of brutal courtroom drama, illness, and dementia. The estate and family are destroyed. Frozen Dinners is the story of Elaine Ambrose who spends half a century searching for love and warmth beyond the contaminated legacy of her fractured family.
Published: Nov. 8, 2018
ISBN: 978-1612542843

Winner of Distinguished Favorite from the Independent Press Awards program. Seven creative stories designed to be read aloud to children. The stories have creative energy to be exciting and narrative rhythm to be soothing. In a busy world where children need reassurance, these imaginative stories provide respite and hope.

2014 Silver Medal Winner for Humor from Independent Publisher Book Awards. First Place Winner for Humor from North American Books Awards program. "Laugh-out-loud funny!" - Publishers Weekly. "An argument for joy." Foreword Reviews. This collection of humorous stories celebrates women who are tumbling down the far side of fifty but know the best is yet to come.

INDIES Finalist for Book of the Year for Humor. First Place Winner for Midlife from Independent Press Awards. Distinguished Favorite for Humor from Independent Press Awards. A sassy collection of humorous stories to celebrate life experiences for women over age fifty. Ambrose notes her feminine mystique sprung a leak after years of competing as a funny female in a serious male job market. Now the work is done, and she invites midlife women to join her for Happy Hour.

Winner of 2018 Silver Medal from the Moonbeam Children's Book Awards program. This creative, educational, bilingual story book was approved by the Idaho State Board of Education for the statewide curriculum. The read-out-loud story describes in English and Spanish the adventures of children who ride around Idaho on a magic flying potato. The 28-page book includes original illustrations, and the text includes days of the week, numbers, colors, and key words in both languages.