Elisabeth M. Lee graduated in History from the University of California, Berkeley. She has worked in various fields but her first loves are art and writing. Her writing has appeared in the Pre-Raphaelite Society Review, DearReader.com, and MaryTudor.net. She is currently working on a screenplay.

“An illuminating look at an influential artistic period, which may well inspire readers to pick up their own pen or paintbrush.”
– Kirkus Reviews 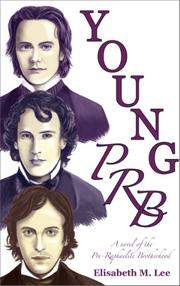 In Lee’s novel, set in Victorian London and based on real events, a group of rebellious young artists battles the repercussions of their refusal to conform.

It’s 1848, and William Holman Hunt has just been accepted to study at the prestigious London Academy of Art. However, he resents the overly prettified, sentimental landscapes that litter the annual Academy Exhibition. He wants to create art that imitates life—all the color, confusion and even ugliness. A few like-minded young men, most notably John Everett Millais and Dante Gabriel Rossetti, share Hunt’s views, and together they form a group called the Pre-Raphaelite Brotherhood. Like any revolutionary group, the PRB has plenty of naysayers, including the vehemently jealous traditionalist Frank Stone and his more famous compatriot Charles Dickens; Lee litters her novel with mentions of these and other notable artistic celebrities of the period, such as Keats, Tennyson and Wilkie Collins. Her novel—a quick read despite the hefty page count—features many detailed descriptions of the Brotherhood’s artwork, and it could have benefited from an illustrated appendix with paintings shown rather than merely described. Nonetheless, Lee has a talent for making the minutest artistic details sound interesting. She also has a historian’s accurate eye for the period, but she doesn’t allow those details to bog down the story and turn it into a dry, purely factual text. The artists of the Brotherhood are portrayed with distinct personalities, styles and beliefs, which, in the novel’s central dramatic vein, affects their struggle to remain united in the face of adversity. Anyone interested in the culture of Victorian London will find plenty to celebrate.

An illuminating look at an influential artistic period, which may well inspire readers to pick up their own pen or paintbrush.

YOUNG PRB: A NOVEL OF THE PRE-RAPHAELITE BROTHERHOOD: Kirkus Star