Elizabeth Zinn grew up in Michigan and attended the University of Michigan and the University of Paris as a Fulbright Scholar. After a career in music she spent eight years as Vice Provost for Academic Affairs at the University of Arizona before retiring to write fiction full time. After a lifetime of authoring various nonfiction and academic works, she now has completed four novels, a collection of short stories, and a number of poems. Two of her works were finalists in Glimmertrain and Leapfrog Press competitions, 2010 and 2011. Her novel 'Heart’s Blood' was a Finalist in the 2012 International Book Awards, won an Honorable Mention in the 2012 San Francisco Book Festival, and received a Kirkus star. Kirkus Reviews named 'Heart’s Blood' as one of the Best Indie Books of 2012.

Ms. Zinn lives and writes in a small town in the mountains of southern Arizona.

“An eloquent, refreshing perspective of the struggles faced by those living along the Mexican border.”
– Kirkus Reviews 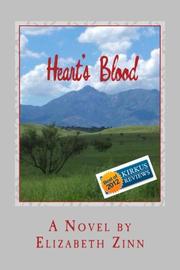 Zinn (The Happiness Lottery, 2011, etc.) returns with a novel that chronicles the trials of a wandering cowboy who learns to take life by the horns.

Tyler “Ty” McNeil makes his living running rodeo shows, just like his father, now deceased, did. Ty spends several years traveling far from home to do so, which strains his marriage. He eventually chooses the rodeo over his wife, finding himself alone and unfulfilled. As a result, Ty makes a radical decision to take control of his life and live it on his own terms. Rather than blindly following the direction of others, Ty now desires to direct his own path, regardless of his obligations. The peace he makes and his thoughts on life as he grows older are magnificently captured through intermittent reflections. Ty abandons the rodeo and sets his sights on a ranch back home in southwestern Arizona. Zinn’s characterization is purposeful, deep and rich; each character is well-developed and instrumental to the story. An intriguing mix of cultures populates the novel: Anglos, Mexicans, Native Americans and mixed-blood families. Although the story chronicles the changes in Ty’s life over the course of two generations, the setting takes almost equal precedence, brought to life by vivid descriptions of the landscape. Among several entwined themes, family and its different permutations are at the heart of the novel: The rejection of Ty’s biological son contrasts Ty’s relationship with his adopted daughter. The author’s love for Arizona is immersed in her lyrical writing, as the impact of environment on family is threaded wonderfully into various plotlines.

An eloquent, refreshing perspective on the struggles faced by those living along the Mexican border.

'Dancer' is a young woman’s bildungsroman, a story of place and time, betrayal and love, kindness and cruelty, and the complexities of human feelings. Though the story unfolds in the beautiful high grasslands of southern Arizona it could take place anywhere. Mikey, the narrator, loses her father as an infant, and her life follows a rocky path through childhood. She is molested by a trusted friend, Uncle Clint, at age five, then basically shunned by her mother, who is tormented by guilt because of having murdered the molester. Mikey finds comfort in school and her friends, among whom are an eccentric family living in a nearby valley, and her childhood love, Remi, who awakens her budding sexuality. After a period of relative peace, Mikey's life is once again upended by a sinister character, Uncle Mitch, who moves in with her mother and systematically takes over their household. He covets their property and when Mikey’s mother is sent to prison for murder, she becomes Mitch's captive and is abused sexually and emotionally for months. During this time she is isolated, cut off from her friends, and sinks into depression. After Mitch murders her beloved horse Dancer and steals all their property, Mikey is sent to a foster home and begins a long path toward retribution. Along the way she finishes college, secures a job in journalism and meets the love of her life, Peter. The novel builds to a final confrontation between Mikey and Mitch, and then comes to a gentle landing, justice served and true love found. Over the course of the story, it traces the arc of Mikey's understanding of life from the simple impressions of a young child to the complex perceptions of a young woman who has been tested and strengthened by adversity. There are a number of colorful secondary characters, and the breathtaking landscape of the Arizona border region forms a dramatic backdrop for the story to play against.

The End of the Music

Kate Swan, a well-known Professor of Saxophone in Tucson, agrees to hear a young boy, Mikal Artina. She is utterly amazed by Mikal’s talent: “He’s one of a kind, one in a generation,” she tells her husband, Noel. Mikal studies with Kate throughout middle and high school and the novel picks up during Mikal’s last years at the university where Kate teaches. Kate is now divorced from Noel and her two daughters, Lee and Amy are grown and attending university. Kate plans to wind her own career down as Mikal graduates, a passing of the torch from old to young. But Mikal’s life and the story abruptly change when Mikal is stabbed to death outside a Tucson night club, in an apparent act of random violence. Kate’s life is shattered and she leaves Tucson to accompany Mikal’s parents back to Greece with his body, which will be laid to rest there. While on the small island where Mikal is buried, she becomes aware of ongoing intrigue involving Mikal’s relatives, and finds herself unwillingly drawn into conflict with his half-brother, Janec, who is Mikal’s double – which unhinges Kate. Unsettled by all the drama, Kate leaves the island for a while, but stays in the vicinity and meets an English travel writer, Martin Wallis, who unwittingly draws her farther into the political and family intrigue surrounding Mikal’s family. As Kate and Martin become closer they are able to share each other’s painful stories and near the end of the book Kate realizes that Martin has played an unknowing but real part in Mikal’s murder, and that the act was not random at all. Although she realizes that Martin had no idea of what he was involved in, and although her feelings for him are real, she cannot accept the connection: “You’re so mixed up in it that I can’t separate you out. Just go away, please.” Kate sends Martin away and decides to leave Greece for France, unable to return to the U.S. yet. But frantic messages from her daughters summon her home. Her former husband and their father, Noel, has received an ominous diagnosis of cancer and she must go back to care for him. As the novel winds down, Kate has taken Noel back into her house and is nursing him during his final months of life. Her relationship with Martin is on hold, undecided, though in her heart she has committed to joining him in England and leaving this life, her career and her teaching position, behind. But while Noel lingers she will stay with him and do what she can to keep his spirits up, and give him hope. Though it is clear that he is dying, Noel clings to the hope they will travel again. “Were you there?” he asks, indicating a large poster of Santorini on the wall. “Yes, I was.” “Were you in that very spot?” he asks. “Almost,” she replies. “My hotel was near that very place.” “The water looks so blue,” he says softly. “Can it really be that shade of blue?” “It really is, Noel. You’ll see, I promise.”

It is Christmas Eve in an affluent suburb of Detroit, located on a lake looking across to the Canadian shore. A horrific accident launches a series of events that generate the story in The Happiness Lottery. Anna Thiers' parents are killed instantly, and she will spend months recovering from her grave injuries – both to her body and her spirit. A compassionate psychologist, Peter Wheaton, guides her through the first weeks after she awakens from a coma, and becomes a steadfast friend throughout the book. He also takes on the job of counseling her troubled grandmother, Elizabeth Brady, who is appointed guardian of both Anna and her little brother, Toby. As Anna struggles to regain her health she is caught up in Elizabeth's neurotic behavior and her own fragile emotions. And Peter Wheaton becomes increasingly pessimistic about Elizabeth's ability to cope with her grandchildren as he uncovers more and more of her past. We also now learn of Peter's bouts of extreme depression, his own demons and the anguish he endures from extraordinary hallucinations. After an outburst of rage Anna banishes Elizabeth from the house for good -- an act that can't be undone and will determine the future for both of them. The Happiness Lottery is a collection of intertwined personal journeys: Anna's difficult path back to health after a devastating accident and her metamorphosis from a surly adolescent into a mature young woman; Elizabeth's passage from a horribly damaged early life to existence as a bitter older woman and beyond, to hope and peace; finally, Peter's brave struggle to overcome his own personal demons and a final confrontation with his destiny. Written with compassion and a deep perception of human relationships, The Happiness Lottery lingers in the mind long after the last page is turned.
Published: Dec. 21, 2011
ISBN: 13-9781468117271