Emily Christensen, PhD, spends her days swimming in words while being pawed at by little children. She and her husband, musical-theater writer Nathan Christensen, fostered more than 80 children in four years, adopting six special needs children (Mary is Deaf, Alex has Autism, Kirk has Cerebral Palsy and a shunt, Barrett has Fetal Alcohol Syndrome, Anber has Reactive Attachment Disorder, and Kyrie was born with almost no airway). They live near the river for all the playtime they can get, when not in the hospital with Kyrie or at doctor visits for the other children.

Dr. Christensen received her Bachelor's Degree in Human Development, and has two Master's degrees: an MS in Professional Counseling and an MDiv in Pastoral Counseling. Her doctorate is in Marriage and Family Therapy, and she works as a counselor and as a chaplain in nearby hospitals. She writes everyday no matter what, and often tours for speaking engagements related to her work - including "Keeping Kyrie", the story of gathering her family through foster care and adoption.

“The author has crafted a powerful memoir that skillfully unspools its dramatic anecdotes from Kyrie’s airlift onward, effectively showcasing Christensen’s awe-inspiring commitment to demonstrating her faith... She ultimately engages readers with her musing narrative... A humble and humbling saga of spirituality and service.”
– Kirkus Reviews 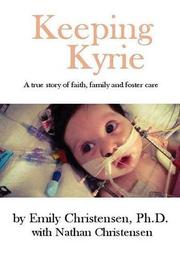 In this debut memoir, a Mormon convert discusses being a foster parent to dozens of children and ultimately adopting six with special needs.

Christensen begins her narrative by recounting the 2015 emergency helicoptering of her foster baby Kyrie from their home state of Oklahoma to a Cincinnati Children’s Hospital that was better equipped to handle the infant’s challenging health care needs; the child was born with Pierre Robin syndrome, a disorder that causes facial and airway abnormalities. The author then proceeds to comment on other key milestones of her life, particularly during five years in which she converted to the Mormon faith, decided to get cochlear implants, battled ovarian cancer, dealt with her parents’ deaths, got married, and committed to foster parenting. Christensen and her husband, Nathan, fostered some 70 children during this period and ending up adopting six with special needs, including Kyrie. Christensen focuses on the baby’s grueling, touch-and-go surgeries (during which the author believed a chaplain’s soft humming helped keep the child alive), her own multiple miscarriages, her shock over her mother’s death in a car accident, and many custody hearings and adoption processes. She concludes the book with her joy over having a family of six children and the fact that their adoptions were both sanctioned by the secular court and celebrated in the ceremonies of her beloved Church of Jesus Christ of Latter-day Saints. The author has crafted a powerful memoir that skillfully unspools its dramatic anecdotes from Kyrie’s airlift onward, effectively showcasing Christensen’s awe-inspiring commitment to demonstrating her faith—most significantly, through her parenting. Her use of flashback and flash-forward techniques makes the chronology of her life unclear at times, though, and the account of her troubled early adulthood before her spiritual rebirth is underdeveloped. Still, she ultimately engages readers with her musing narrative, which is admirably infused with sympathy for the struggling, often drug-addicted parents who gave up their children for adoption.

A humble and humbling saga of spirituality and service.

Women Who Run with the Wolves

"Tears are a river that take you somewhere."