Enrique Rosado is a Puerto Rican who grew up on the island for a bit before landing in Killeen Texas, a town that cultivated him and made him the person he is today. His love for movies, comics, and any form of storytelling fuels his writing. Enrique currently lives in New York City, writing, enjoying the food, and living life.

“A dreamy, action-oriented tale for all ages.”
– Kirkus Reviews 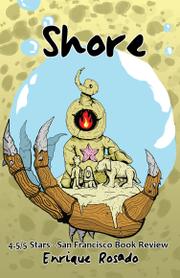 In this debut fantasy, a young woman wakes up in what seems like paradise only to meet a wizard and numerous strange creatures.

Chemistry student Lahar remembers falling asleep in front of the TV after a long day of college classes and work. When a breeze hits her face, she wakes beneath a beautifully colored tree. She wanders and finds a beach. There she meets a young man with a mohawk named Arena. His gigantic sheepdog, Pyros, and the fact that they live on the beach inspire her to guess that he’s some kind of wizard. Arena indeed uses magic to locate the being who brought Lahar to this realm. Arena’s floating arrow, made from grains of white sand, points through a meadow and to the entrance of a secret tunnel. The softly lit passage brings the trio to a cavern, in the center of which is a floating island. There, a figure in a tattered cloak awaits them. Turning, the entity reveals itself to be a wooden mannequin with white flames for eyes. This being, named Void, has kidnapped Lahar. He says that to return home, she must help him get Arena’s heart. For his adventurous tale, Rosado offers a parade of whimsical elements reminiscent of early, dreamlike video games, including “The Legend of Zelda.” Arena’s home is powered by lightning in a bottle that is “bursting with a flurry of neon colors.” He also arms Lahar with a water cannon that looks like a colorful toy ray gun and a gold bangle to channel the magical Source, which infuses all things. The action commences when Void sends three masked Beasts against the heroes: Bark, Toothpick, and Statue. In turn, the heroes are aided by wisps—versatile beings made of sand and animated by flame—named Doc, Crew, and King. While the story skews toward YA readers, Arena teaches Lahar magic with the caveat: “Don’t trap yourself in a cage of your own making. It’s good to be ambitious, but enjoy the life you have.” A cliffhanger adds a further quirk to the puzzle of sending Lahar home.

A dreamy, action-oriented tale for all ages.