Eric Haggman is CEO and Creative Director of Massachusetts-based Haggman Advertising, which he founded. His work has been cited for excellence over 200 times by nearly every major advertising award show in the country,including first-place awards at Clio, ANDY, Best of Broadcasting, The International Broadcasting Awards, L.A. Art Directors, London Art Directors and Best of Shows at The Hatch Awards and Boston Art Directors. His work has been honored over 10 different times at the U.S. EPA’s ENERGY STAR® Awards in Washington, DC.

A Milwaukee, Wisconsin native, Eric graduated from Colgate University before moving to Boston and embarking on his career in advertising. The Apology is Eric’s first novel and inspired by his own world travels, interest in the underpinnings of the criminal world, a passion for history, and thrillers by his heroes James Patterson, Michael Connelly, and Stieg Larsson among others.

When he’s not traveling throughout Asia and South Africa shooting videos and gathering research for his book, you’ll find him at home, inches from the Atlantic, with his partner and wife, Emily, and Shanghai, their fluffy white Ragdoll cat who thinks he’s a dog.

“An impressive novel, brimming with action and history, with a lead character that has enough swagger for future adventures.”
– Kirkus Reviews 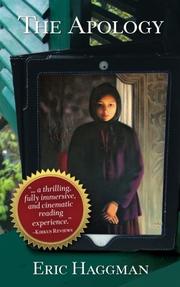 A filmmaker comes to terms with his past in Southeast Asia while battling denizens of the criminal underworld in this debut political thriller.

Video producer Christian Lindstrom has come to Vietnam to shoot tourism commercials for a high-end, Tokyo-based advertising agency. Together with Japanese-Vietnamese co-producer Nachi Tanaka and Vietnamese production assistant Hai, he scours the lush, historic environs in and around the city of Hanoi for shooting locations. Their work becomes bittersweet for Lindstrom, as he’s haunted by his memories of being an armed combat soldier on the very same streets. As the production proceeds through Ho Chi Minh City and Tan Son Nhut Air Force base, Christian’s attraction for Nachi deepens, but then she suddenly disappears in Hoi An, a port city on Vietnam’s central coast. She later appears in a ransom video on YouTube, seemingly at the mercy of two kidnappers who demand an apology from the Japanese government for a World War II massacre of thousands of the city’s citizens. The story goes viral as the clock ticks down to Nachi’s potential murder. Soon, Christian, aided by Hai and clever police investigator Bao, risks life and limb to rescue Nachi, but things take an unexpected turn, involving a vengeful Hanoi gangsters and police-protected Yakuza hit men. In a brisk succession of clipped chapters, Haggman, an advertising agency entrepreneur, incorporates vital snippets of Vietnam’s past into the framework of his novel. This sense of nuance embellishes the storyline, gives readers historical perspective, and gives the nefarious evildoers a purpose for their malevolence. The author also quickly ramps up the suspense when Nachi disappears early on. Overall, these qualities add up to a thrilling, fully immersive, and cinematic reading experience. The ominous, open-ended conclusion, meanwhile, leaves room for potential further installments.

An impressive novel, brimming with action and history, with a lead character that has enough swagger for future adventures.

Author makes no apology for "The Apology", 2016