After graduating from Whitman College, Dr. Nordstrom earned three graduate degrees including a doctorate from the University of Southern California. Before his retirement as a clinical psychotherapist, he served thirty years with the Kaiser Permanente medical care program and was appointed Associate Chief of the Mental Health Department. His extensive travels have taken him around the world. Most recently, he visited Russia and Finland in June, 2015.

Dr. Nordstrom has written four novels in the past twelve years with his latest, Cape Deception, being published in August, 2015. He is a member of Willamette Writers, Portland, Oregon. A life-long native of the Pacific Northwest, he and his wife, Barbara, have homes in Washington State and on the Oregon Coast.

“A top-notch mystery with ever escalating suspense and a satisfying payoff.”
– Kirkus Reviews 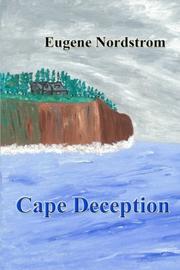 Old money is the target of a calculating stalker in this engrossing thriller.

The target in this mystery by Nordstrom (Reflections in Gold, 2009, etc.) is Amy Granville Fontaine, the heir to a Northwest lumber fortune. At the novel’s start, divorcée Amy is gaining a sterling reputation as a painter of seascapes in the greater Portland, Oregon, area. She soon meets art critic Harold Gorman, a widower whose wife died under mysterious circumstances. The two are soon discussing the nature of Amy’s work: “It’s a somber observation, but I wonder what direction your work might have taken had you not become so familiar with the tension between darkness and light,” says Hal. They quickly become close, to the dismay of Amy’s daughter, Monique; Monique’s boyfriend, Ralph; and Amy’s friend Diane Demaris, a gallery owner. All are concerned with Harold’s intentions toward the heiress. As Diane tells her, “You are a very eligible, and extremely desirable divorcée. For some men, there’s never ‘enough money.’ Think about it.” Shortly after the pair announces their engagement, strange things start to happen at Pelican Rest, Amy’s vacation home in coastal Oregon. At first, it’s a strange man’s face in her front window, but the incidents become increasingly violent, unsettling Amy. Since the stalker seems to know her every move, every male around her is a suspect. Amy eventually stops being a victim and goes on the offensive, leading to a terrifying climax. Nordstrom does an admirable job limning Amy’s rarified world and creates believably flawed characters. He slowly intensifies the suspense, so readers can well understand Amy’s mounting fear (it’s not paranoia if people are out to get you). One drawback is that the stalker’s identity becomes evident early, but while the reader may have a good idea what’s going on, none of the characters ever do until it’s too late. An element of doubt lingers right through to the end of this captivating thriller.

A top-notch mystery with ever escalating suspense and a satisfying payoff.

Profit-driven developers want to clear-cut, bulldoze, and bury Lake County's pristine wilderness under the infamous "monument to progress" known as Reflection Lake Resort. Bob Elliott, investigative reporter for The Lake County Herald, is on a dangerous mission to expose the sinister connection between Reflection Lake's land developers and the corrupt county political machine. Battle lines have been drawn and the bitter war between environmentalists and developers turns ugly. Only time will tell if an honest man, brought to his knees by murder and blackmail, will survive.
Published: April 9, 2009
ISBN: 978-0-595-52513-3

The Honeymoon Car is a love story about two couples--decades apart--who are drawn together in an extraordinary way. Out of the mists of time, a pristine Packard Super 8 pulls up to the main entrance of a fashionable lakeside resort. How could curious onlookers know its young passengers have come from a wedding that occurred fifty-three years earlier? From their own tragic experiences with loss, Larry and Molly Hill have learned how love can heal. Now, possessing a revelation powerful enough to even survive death, they have returned with a message that can change troubled lives forever.
Published: June 29, 2005
ISBN: 1-4134-8681-9

The Road To Glory Land

If they built a freeway straight to heaven, surely there are those who would still prefer slower routes. After all, some people are in no hurry to meet their Maker. That's definitely the case with Brother Charlie Savoy. No matter that he's a con man, Brother Charlie has charisma, and he can mesmerize crowds like a snake charmer. On the revival circuit, he knows how to make trusting souls part with the last dollar in their wallets--and that's exactly what he aims to do. Fortunately, there are a few who make this same journey with loftier goals. Like the saints in stained glass windows, God's pure light streams through them. Sister Grace Warren is just such a person. She's in no hurry to meet her Maker because He handed her a job to do. To that end, she has been given two gifts: she sings hymns like an angel and, since childhood, her touch has healed. The dynamic couple is unbeatable--their smoldering sexual tension inescapable. Inevitably, they both succumb to the tidal forces that irresistibly ebb and flow between them--forces that change their lives forever.
Published: March 23, 2006
ISBN: 13: 978-0-595-38657