Eusebius Clay studied creative writing at Goucher College with Jonathan David Jackson, Madison Smartt Bell, and Laura Lippman, who was the writer in residence. He was accepted into a selective study abroad program to study Shakespeare at St Peter's College in Oxford, where he researched source texts. He now works as an editor for English/Spanish educational content.

He is a passionate reader of literary fiction. With his creative writing, he takes big risks, weds elements of poetry to prose, and focuses on literary innovation. His current project is a novel about a riverboat gambler. His palindromic poetry has appeared in the MENSA BULLETIN, the magazine of American Mensa.

“This entertaining, if not ultimately groundbreaking, collection provides readers with a range of fiction's possibilities.”
– Kirkus Reviews 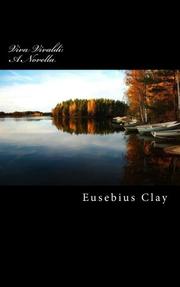 Four short stories display a range of subjects and techniques that push the conventional limits of fiction.

In Clay’s debut collection, a cuckolded man fantasizes about his rival’s demise; a World War II pilot records his experiences fighting the Luftwaffe; a mentally ill man navigates the world the best he can; and a man observes an acquaintance demonstrate on a sidewalk populated by buskers the innate brutality of the human race. Although the stories are not connected (besides by their sections, named for the four seasons of the year), Clay’s voice—and his ability to adapt tone, voice, and style to his subjects—threads them together. The first, “Dread in Madrid” (in the “Fall” section), is the most experimental. Lyrical, associative, and nonlinear, it weaves and snags on bits of musical language and dreamlike images: “Here he is again, but not for a loss or a gain; only pain—blocking oxygen to the brain like a mad drab bard dam. I succumbed to the sin of absinthe, amber ambrosia also, to revel in the liberation of libations. Candor: can opener can open Pandora’s door. Es la hora. We discourse. Stay the course.” As an investigation of one man’s feelings toward the friends who betrayed him, this semi–stream-of-consciousness style fits the subject; although readers may find this introduction to Clay’s collection a bit formidable, their perseverance will be rewarded with more accesible prose in the next few stories. The “Winter” entry’s “Pistol Pete” captures the cadences and observations of a young man contemplating life and death and what it means to fight for one’s country: “Slam the stick forward and out-dive ’em; the ’stang can out-dive ’em all. But you can’t out-dive death.” It’s the most straightforward tale in this collection; the others rely upon subtle shifts in perspective and narrative disruption to achieve their effects. This entertaining, if not ultimately groundbreaking, collection provides readers with a range of fiction’s possibilities.

An admirable stab at narrative innovation within the short story form.

A Hero of Our Time