Connect with Eva A. MacDonnell

Eva A. MacDonnell just speaks for Eros, who is the real author. Casting a long shadow, Eros lives in the Wild of New Hampshire. Well, not that long of a shadow and the wild is not that Wild! He lives in a very small house with an elderly couple, minding another dog and a cat, while keeping guard on 20 acres of farmland, chasing deer and wild turkeys away daily. In this dog-world, he is the undisputed alpha-dog, cruising and perusing his domain. When he is not transcribing his life story to Eva, Eros, now an accomplished philosopher, holds court with squirrels, raccoons, bears,cardinals, and bluebirds, who come by his house to partake in his wisdom. In between these soliloquies he beats off coyote attacks with one paw and a mighty bark. Eva does live with Eros, and on a good day she does what he asks. (Good day for her that is! For Eros, everyday is a good day. ("Little tyrant! - Now how did that get in there?" Eva pondered.)

“Overall, MacDonnell’s book is daring, original, and cheeky. She’s as quick with a joke as she is with a philosophical maxim, and her novel is a dexterous mix of humor and deep reflection.”
– Kirkus Reviews 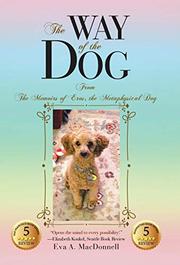 THE WAY OF THE DOG

Have you ever looked into your dog’s face and seen a flash of recognition—a canny glance that makes you wonder if Sparky knows a lot more than he’ll ever let on? MacDonnell apparently has, and the result is this deeply innovative new volume, which plumbs the depths of canine psychology. The main character is Eros, a newborn pup learning to make his way in the wide world. His mother and first mentor is Skylark, or “Shyla,” as her human owners know her. She brings Eros (and readers) up to speed on some basic truths about their world: Dogs are smarter and more perceptive than humans; they communicate via telepathy; and they take care of people, not the other way around. Eros is a preternaturally reflective young dog, and his questions quickly outstrip his mother’s teachings, sending him on an intellectual journey through the realms of metaphysics, psychology, faith, and a host of other topics. Overall, MacDonnell’s book is daring, original, and cheeky. She’s as quick with a joke as she is with a philosophical maxim, and her novel is a dexterous mix of humor and deep reflection. The only real weakness is that it all gets a bit repetitive from time to time. Take, for example, the first lines of the second, third, and fourth chapters: “Three days of eating, sleeping, and not a lot of thinking went by”; “These early days passed quickly. Eros slept a lot, ate a lot, and slept some more”; and “The next few days were just a lot of feeding and sleeping.” A more streamlined product would have been even more enjoyable, but these small structural issues don’t dampen the fun—or the fulfillment—that the book delivers.

An ambitious and insightful new novel in which a dog is your co-pilot.